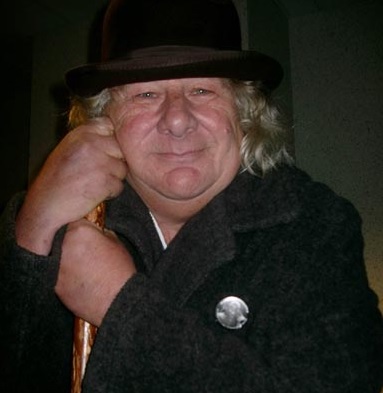 Wavy Gravy is a soldier of the clowns.

He was recently at a large demonstration at the Lawrence Livermore Laboratory in California, a place where they do much nuclear stuff. He was dressed as a giant bunny, and carried a sign saying “Mutant Bunnies for Peace – Save the Humans.”

And he wore a human foot on a chain around his waist. For luck.

“Now I assure you that police do not want to be photographed busting no mutant bunny,” he notes genially. “It messes with their macho image.”

So he had practically walked in the gate before he was detained.

“So they grab me, and it was then that I whipped out – my ‘Get Out of Jail Free’ card.” He pauses. “Laminated.”

He has the impeccable timing of a years-practiced comic. “It’s very important to laminate it first if you want it to be effective.”

Well, the cops looked it over, then called in their superior, who called in his superior. Ultimately, the ultimate superior was called in. He scrutinized the laminated card, as all the other police waited breathlessly.

“Well,” said the cop honcho, “this thing’s only good in Contra Costa County….”

“But see,” notes Gravy, “what it did was smash any of that yada-yada energy and it lightened everybody up. I mean, who wants to be blown up by nuclear holocaust? Not even the police. It’s a question of survival.”

Wavy calls his sense of humor his greatest survival weapon. But he also claims he’s not really all that funny.

“It’s the situations that are funny,” he says. “All I do is point.”

“Look,” he is saying, nonverbally, “see, this is you.” We see ourselves, being silly, being vulnerable, and its OK.

With laughter, he breaches our daily defenses and strikes at our hearts with his cream-pie rapier. And we think. And we see. And we understand.

But it requires a delicate balance. Too much whipped cream, and you have nothing but the shallow Barnum and Bailey, clowns without purpose chasing their empty tails, our laughter a hollow practice at the letting down of walls without the consummation of illumination.

And too much of the rapier will wound, injure, cause the hitherto willing victims to recoil in pain, shut the doors, turn from the wounding messenger and spurn – or fail to attend – the message. Lenny Bruce learned this, and it killed him.

Before that, before Bruce unleashed his acid wit on an America that had not yet been Norman Leared, Saturday Night Lived, and MTV’d, Lenny Bruce was Wavy Gravy’s manager.

“I always get arrested as a clown,” he says. “And you know why? You know why?” he says it slowly, like a teacher explaining an important lesson to his students, like a minister imparting a parable of wisdom: “Because clowns are safe.”

There have been a lot of long roads for Wavy. His resume reads like…  well, like “A certified psychedelic relic,” as he puts it.

He was Born Hugh Romney on May 15, 1936 in East Greenbush, right outside of Albany, NY. He lived in Albany for almost two decades.

Then, “A hundred million years later,” Wavy Gravy was born: He was one of Ken Kesey’s original Merry Pranksters; he M.C.’d at Woodstock; he took a busload of hippies from Paris to Nepal.

And he got involved in politics. His street-theater group worked for Lyndon Johnson’s Campaign in 1964, “because Goldwater was going to start dropping atom bombs.” But when Johnson escalated the war in Vietnam, Wavy lost faith in politicians.

In ‘68 he ran a pig for President: Pigassus. “She was the first female black-and-white candidate for president,” he recalls proudly.

Wavy believes that in any year, “none of the above” should be an option on the ballot. After all, even in Chile they get to vote ‘no’.

“In the old days,” he recalls, “we used to register and write-in for Nobody. The concept was ‘Write in, right on, write off’.”

Wavy says he would never run for President himself, but he’s happy to campaign for Nobody.

“I just work for Nobody. I’m Nobody’s fool.”

He points out that when you look at the issues, Nobody comes out looking magnificent:

First of all, Nobody totally understands the economy.

Nobody’s freed the hostages, Nobody knows what to do with radioactive waste, Nobody’s lowered your taxes.

Nobody’s in Washington right now working for me and you.

Nobody keeps all his campaign promises.

Nobody always tells the truth.

And Nobody works for nothing.

Nobody knows you when you’re down and out…

“Look,” says Wavy, a sardonic smile on his lined and lumpy face. “I firmly believe that Nobody should have that much power. I want Nobody to run my life. And if Nobody wins – Nobody loses….”

Which just goes to show that Nobody is funnier than Wavy Gravy.