President Trump has imposed a tariff on imported solar panels (details here) that industry analysts say will be a job-killer. Estimates range as high as 30,000 jobs sacrificed this year. And that’s on top of jobs that were already lost because of slowdowns over the past six months as companies cut back on projects while waiting to find out how much their panels were going to cost.

Thinknum can back that up from our numbers – we track online job listings to create a data trail.

SunPower ($NASDAQ:SPWR) was hiring at a clip of around 200 jobs right through March of last year. Now they’re well below that, and slipping.

Elon Musk’s Solar City ($NASDAQ:SCTY) has been hoarding panels against the possibility of a tariff, and last week announced an alliance with Home Depot to sell their home systems, but even so they’ve cut back on hiring substantially. From a typical 600 to 700 job openings on a regular basis, Solar City cut that in half in September, and so far this year openings have numbered in the low 100s.

And Solar City’s total number of employees (as self-reported on LinkedIn) has been steadily dropping for more than a year:

You’d think this would have helped First Solar ($NASDAQ:FSLR) as the largest panel manufacturer remaining in the US, but they don’t seem to be adding many jobs. Hiring is off its 2016 highs of near 100 listings. It was flat to slightly rising most of last year, then started declining again in November.

The good news: Abigail Ross Hopper, CEO of The Solar Energy Industries Association, told politico “The tariffs imposed Monday will cost the industry 23,000 jobs, but the 30 percent tariff was not as bad as it could have been, since Trump could have imposed a 50 percent tariff.”

So the current concensus appears to be: The tariffs will slow glowth and rattle the industry a little, but not destroy anything. Panels have gotten so cheap that analysts estimate the impact of the ruling will only add 3 to 4% to home installations and 6 to 10% to industrial applications. 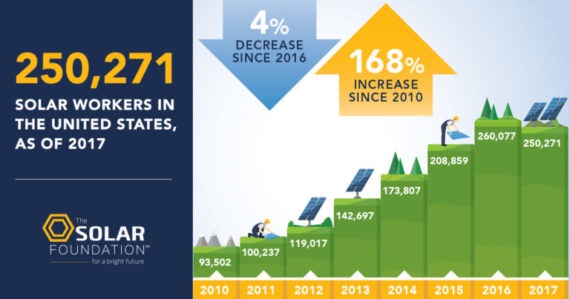