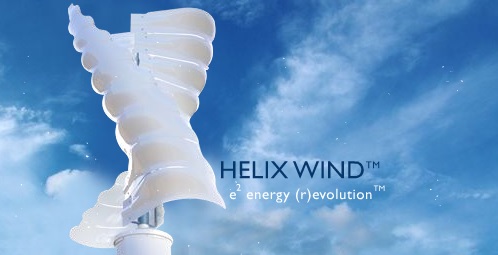 Wind power has been part of the energy landscape for thousands of years. But in the nuclear era, it was viewed as quaint – “Tilting at windmills” became a metaphor for fighting hopeless battles against the forces of change. Mind you, Helix Wind of San Diego does come off a bit quixotic in their corporate philosophy: “Freedom is at the heart of our values – energy independence and autonomy – a freedom fueled by a resource that never runs out. The wind.”

But this ain’t Cervantes’ windmill. Not only is their Savonius more efficient, simpler to set up and less expensive to buy than your average model – it’s also flipping gorgeous. When I saw this sleek, nautilus spiral at the Wired NextFest, it took my breath away.

The key to the design: vertical orientation, which eliminates a lot of traditional windmill issues. When folks apply for zoning variances to install wind power, they’re nearly always battled by neighbors who say (quite rightly) that windmills are ugly, noisy, obtrusive, and dangerous to birds and other wildlife.

All of those problems are eliminated in the Savonius. Instead of horizontal propeller-like blades with tips that spin at very high speed (noisy!), and must therefore be set very high above the ground (dangerous!), the Savonius spins vertically, with no more noise than wind blowing through the trees, on a pole (no tower) that doesn’t cost an arm and a leg. Oh, bird-lovers should note that at the low speeds the Savonius spins, you never have to worry about it taking on that translucent look that encourages birds to try to fly through it…

And there are rebates – if you live in California, the state will cover up to 77 percent of the cost; other states are coming on board, as well. Helix Wind even has a calculator function on the website to help you work out the financials.

But we shouldn’t worry about such Philistine considerations… what, after all, is the true price of beauty?