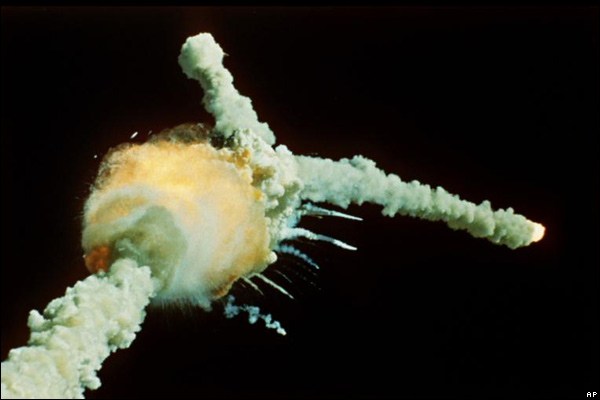 Today marks the thirty-third anniversary of the space shuttle Challenger disaster. Eight years ago, I wrote this piece about the way politics was more and more imposing itself on science. Unfortunately, things have only gotten worse and worse since then. 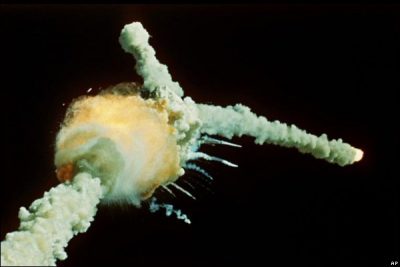 But that’s a formula for disaster – like the Challenger disaster that took the lives of seven astronauts and irretrievably damaged the American space program. On the 25th anniversary of that tragedy, it’s worth recalling how it happened.

It was cold that morning – too cold for the o-rings on the fuel tanks to seal well. When one of the engineers went home the night before, he told his wife “I think they are going to kill those astronauts tomorrow.”

But the engineers didn’t have the final say. There was pressure to get the Challenger launched that day from upper management.

And so it went up. And exploded in flight.

The next time you hear someone saying the science on climate change “hasn’t been proved definitively”, recall the words of the engineer who was pressured into giving the go-ahead:

The VP of engineering was pressured to change his mind and “Take off his engineering hat, and put on his management hat.” He then told NASA that “The data predicting blow by (of super-hot gases) was inconclusive.” NASA heard silence on the phone after that, which was interpreted by them to be a go ahead to launch.

The rumors that the shuttle had been pushed to coincide with President Reagan’s State of the Union speech were pretty much debunked by the investigation (although to be fair, the “debunking” is all based on the word of officials who would have given the order, who in the wake of the disaster had strong motivation to lie)

There was also a slanderous rumor spread by anti-environmentalists that an EPA ban on asbestos had caused the o-rings’ putty to fail (there was no ban until 3 years later),

But there’s no doubt that political pressure and budget cutting left NASAs managers (political appointees) feeling the pressure to get that mission launched.

The real tragedy of the Challenger disaster was that it was entirely preventable.  Most of the problems with the joints were known about years before the accident, some were even recognized before the first shuttle flight.  (There were also a number of problems with the main rocket motors, but most of these were solved before the fatal flight. (Feynman p.28))  But fixing the problems would have meant even more delays in a program that was already behind schedule.  Instead of fixing the problems as they were found NASA management rationalized that if the last flight succeeded then the next one would too.

Worse was the political interference before the start of the shuttle program. In order to avoid high upfront-costs, the Nixon administration went with a scaled-back program. This saved money initially, but cost more long-term, and also left the shuttles with vulnerable, fragile external fuel tanks – which contributed to both shuttle explosions.

The author of  the book “Willful Blindness“, Margaret Heffernan, notes that it’s not the engineers, designers, technicians and even manufacturers who make these kind of decisions:

Technically, the cause of the shuttle’s fatal explosion turned out to be a small rubber ring which cracked when subjected to exceptionally cold weather prior to launch and the extreme heat at launch. The fault was well understood — so why had the shuttle been allowed to take off?  [Richard] Feynman described with some scorn the political pressure felt by engineers to deliver to then-President Reagan a story with feelgood PR:

“For a successful technology, reality must take precedence over public relations, for Nature cannot be fooled,” Feynman wrote. Today, most of us would be surprised to encounter anyone who felt that science regularly prevailed over PR. Feynman took it for granted that once everyone realized the trade-off between Nature and politics, they’d make the safer choice. Few would be so certain today.

Check out this documentary on the disaster from the BBC, and think about it the next time you hear the politicians trying to overrule scientists.