Once upon a time, there was a peaceful city, a city of grand hopes and grand dreams. A city where men who had once armed against each other, each a law unto himself, came together in concord and harmony for the common good.

The city was Saratoga Springs, and a Camelot it was not. The men were not knights of the round table, but knights of the criminal syndicate that ran the gambling around the country, taking advantage of the hopes and dreams of millionaires and hustlers alike. And their common good was the enormous profit that poured out of their casinos.

Arnold Rothstein. Al Capone. Lucky Luciano. Meyer Lansky. Joe Adonis. The party lasted (with a few trivial interruptions for temporary reform movements) from the end of the 19th century until the mid-1950s, when Senator 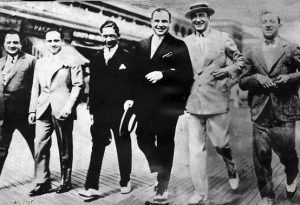 Estes Kefauver rode into town as Mordred (in shining armour) and shut down the round tables for good.

One of the wildest stories of the early days is associated with that first name: Arnold Rothstein, owner of The Brook Casino. People who saw John Sayles’ film “Eight Men Out” will remember Rothstein as the corpulent sleazeball who paid off the players of the Chicago White Sox to throw the 1919 world series.

Nothing was ever proved, of course, but it was said of Rothstein that he wasn’t really a gambler, since he would only bet on sure things. His greatest Saratoga triumph came just two years later, when, through some shrewd manipulations, he managed to have the Whitney Stakes results fall in his favor – to the tune of about $450,000.

He later learned the hard way about trying to outrun bullets (not being the only gangster who preferred sure things). But that was in New York City; never in Saratoga Springs.

That was the one aspect of the city in those days that was Camelot-like – the self-imposed truce.

“There was no violence, no robberies or burglaries in Saratoga in August during the ’30s and ’40s,” explains Greg Seifker. “Any suspicious characters were immediately thrown out of town. There was too much money to be made in the casinos. I talked to one guy who used to work at the Piping Rock – he says he used to stand on the roof with a machine gun. He never used it; they just wanted everyone to feel safe.”

Siefker, along with his wife, Shiela Parkert, owns the last of the hotels to survive the fires and wrecking balls of the ’50s and ’60s – the grand old Adelphi Hotel on Broadway.

He is too young to remember the gambling years himself, but has fed a voracious curiousity about those times with many long talks with veterans of the gilded age (old-timers who, while happy to offer their recollections to a dashing young hotellier with a rakish eye-patch like Siefkert, were more reticent about reminiscing for the printed page).

Siefkert particularly loves to hear the stories of his own hotel. Meyer Lansky for instance, made his headquarters in the Adelphi, although not because he preferred it to the larger, more sumptuous hotels like the Grand Union or the United States.

“Saratoga was restricted back then,” he explains, taking a sip of Saratoga Water from a cut-crystal glass. “Jews weren’t welcome in a lot of the big hotels, but the Adelphi was owned by a Jewish family from Austria, or maybe Hungary.”

One can still see the attraction. Sitting up on the second-story piazza, shaded from the sun by an overhang supported by the long colonnade of Moorish pillars, one can still preside over the traffic and pedestrians on Broadway like a presidente in a reviewing stand. Lansky would bask on the balcony, or hunker down amid the dark pillars of the lobby, and conduct his business: running Murder, Inc, the mob’s enforcement arm; and all the croupiers and dealers for all the casinos in America and Cuba.

“Lansky was one of the head racketeers of all time,” Siefker says. “Anyone who needed a reliable dealer would call Lansky, and he would send someone. They were guarenteed no trouble – because if the dealer did something dumb, Lansky would see to it that he never did that again. Ever again.”

It wasn’t just mugs and bookies, though – otherwise, there wouldn’t have been the money to attract those types. Saratoga also attracted the crème do la crème of America’s millionaires, who would flock north from New York City and Newport to follow the horses and the casinos to their August feeding grounds.

This is probably the only known instance of prey following the migratory patterns of its predators; but then, Saratoga does that. One wit has observed that Saratoga is the only place where the windows clean out the people.

That might have been Henny Youngman – he was here on a regular basis, as was Sophie Tucker, Bing Crosby, and scores of other top entertainers of the era. Jean Harlow made her last movie here, “Saratoga,” with Clark Gable as leading man.

Gable used to come in to the Adelphi to get his shoes shined every day. He would loyally go to the same boy, and when his shoes were polished till they gleamed, he would tip the youngster ten cents.

This went on every day of filming, until the last day. After his final polish, he leaned down and put something in the boy​’​s hand, grinned, and walked away. It was a $50 bill, signed “Best Wishes, Clark Gable.”

When Seifker first heard that story from a no-longer young liquor salesman, he says he asked him right away if he had spent the bill.

“Oh, sure,’ the man said, “I gave it to my dad and we spent it right away. There was so much money here in those days that I made more money in August then, as a shoeshine boy, than I do today, as a salesman.”

Alas, all good things must come to an end. The Kefauver commission busted all that up, the lake-houses burned down, and Saratoga went into a tailspin decline. It’s only in the past ten years that things have returned to the high-rolling days of the past.

“When we took over the hotel it was a mess,” Seifkert recalls. There was water damage and vandalism, and none of the rooms were really habitable. The first year they just opened the lobby and the bar, and they’ve restored it piece by piece since then (there are still 5 rooms in unrestored condition; but they don’t rent those out).

They have done a lovely job. The lobby is all dark woods and deep greens, stained glass and palms, with plenty of comfy chairs and chaises to recline in. The bar is one of the nicest places to spend a quiet evening with a few friends for good spirits and Parkert’s special desserts: such delectables as chocolate pecan pie, chocolate mousse cake, raspberry tart, or chocolate angel food cake.

With faux-marbre pillars and wall paintings, the bar creates the effect of sitting on a veranda looking out on a serene, colonnaded Victorian garden. And out back, there is a real Victorian garden with white cast-iron tables and chairs for relaxing under summer skies, whether blue or star-spangled.

Seifkert gets up; he must return to work. Young workers are parading in and out with new mattresses, replacements for most of the rooms. The hotel is very busy, and their busiest time of year is about to begin.

“When we bought this, nobody wanted it,” he says. “It was a big white elephant. But Doc Farrone, who owned this place and a lot of Saratoga Springs, believed in property. He figured eventually, it would come back.”

He grins. “Eventually, it did.”