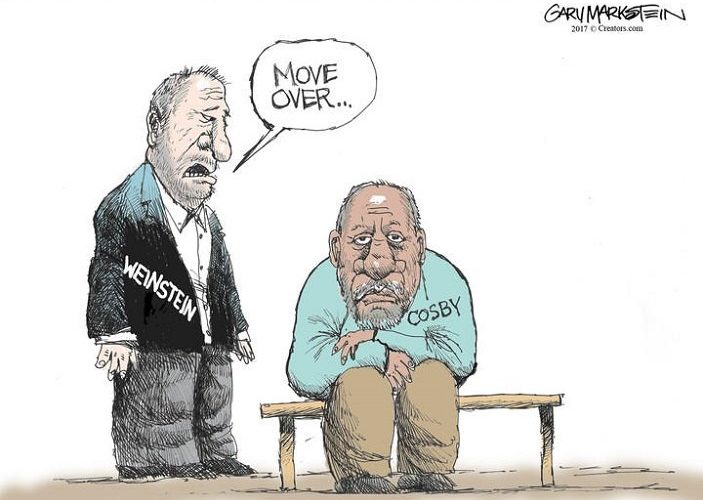 Thanks to Harvey Weinstein, sexual harassment is back in the news. God help us.

I wrote this piece 20 years ago, and it’s still relevant today. I wish it weren’t. Just like 20 years ago, people are saying “Why didn’t she come forward when it was happening? If it were really harassment, she should have spoken up.”

Sexual Harassment: Women are not the only ones to suffer
(Originally appeared in the Berkshire Eagle)

So 75 percent of men polled say they would be “flattered” at sexual advances made by a female co-worker. Bad news, guys – sexual harassment doesn’t work like a fantasy letter in “Penthouse” magazine.

It happened to me at my first job.

Right around the time I was hired, I found myself at a weekend social gathering that was also attended by my editor – an older, married woman. She had to finish off a column that was due the next day, told me that she was ducking back over to the office, and asked if I would come along to proofread it.

Naturally, I was flattered that she was interested in my professional input.

Unfortunately, it wasn’t my professional input she wanted, as she made clear after we arrived by taking off her glasses, looking me right in the eye and saying, “You can kiss me if you want to.”

I suggest that, faced with that kind of reality, every one of those 75 percent of swaggerers who say they would be “flattered” would feel exactly the way that I felt: sheer, abject terror. Remember, I was very young, in my first job – a very promising job, in a very tight field. I had every reason to believe that my entire career hung in the balance at that moment.

Sexual desire? I suppose some people are turned on by a feeling of anxiety, nausea and terror, but I’m not one of them. There is nothing sexy about the situation. Nothing.

What did I do? I did what thousands of men and women do in similar situations every day. I played along, trying to balance my boss’ increasing demands with my own self-respect.

Over the next few months, I found myself called into her office for “private discussions,” was invited to meet her for private lunches, found her “showing up” at public events she knew I was going to be attending.

My co-workers were resentful of the amount of time she spent with me, and morale in the office suffered. Eyebrows were raised in the community. Her husband never said anything directly to me, but I have no doubt he knew what was going on, and he offered me semi-veiled hints about the dangers of mixing my personal and professional life – dangers I knew only too well, as they were a source of daily anxiety for me at the office.

When she suggested we get a hotel room, I was able to deflect her; fortunately for me, she never pressed the issue. I honestly don’t know what I would have done if she had.

This went on for three months, until I began to get praise for my work from the publisher and other editors, and felt I was in a strong enough position to politely but firmly tell her this couldn’t go on any longer.

Again, I was lucky – she was relatively gracious. She could have fired me, or turned vindictive – it would have been easy for her to make my job a living hell. Even so, I was operating under a permanent black cloud, never knowing when the whole thing could break wide open again. I lasted another 14 months, and when a better position came up, I jumped at the chance to get away from her.

Why didn’t I sue?

Get real. It would have been my word against hers, and in the meantime, who would hire me? I knew it would be downplayed. I knew some people would say I should have been “flattered”. One person I did tell – a psychiatrist, in fact – told me “You must have encouraged her.”

So, like Anita Hill, I just swallowed the whole thing for years.

Now, I see smug men clucking their tongues and saying, “But if Anita Hill was so upset by Judge Thomas’ behavior, why didn’t she quit?”

The answer to that is simple: She wanted to be successful. She had a good job, and she didn’t want to jeopardize her career track. When she had the chance to move up with Judge Thomas, she took it – if my abusive editor had moved up the publishing ladder and given me a chance to follow, I probably would have done the same thing.

What’s so confusing about that? Particularly as a woman and a minority member, Anita Hill could expect the deck to be stacked against her from the outset. She made the best of a bad situation. Can we fault her for that?

I know there are still some men who will say, “But Thomas didn’t really do anything. What’s the big deal about telling some dirty jokes?”

I have a simple rule of thumb for men: If you wouldn’t do something in front of your mother, don’t do it to your co-worker.

What’s the big deal about a dirty joke? Well, would you say that to your mother?

What’s so bad about putting up a centerfold in the mailroom?

Well, would you walk into your mother’s house and tape one up on the refrigerator?

How about the buddy who tells you, speaking of a co-worker, “Ah, I know why she wouldn’t date me – she’s just a stuck-up bitch”? How would you feel if someone was talking about your mother that way? A real man would probably punch the jerk’s lights out.

Put it in “the mother context”, and most of these disputes seem sort of silly.

And yet, some men still act as if they have the right to treat a fellow human being who happens to be stuck with them by an accident of employment in a way that they would never treat someone they respect. And some employers – who would never tolerate employees who were chronically late, or turn up at work drunk – still tolerate behavior which is just as destructive to a productive work environment. (That’s right – sexual harassment isn’t just mean-spirited and a bad thing to do; it’s also bad for business.)

And for men who still don’t get it, try this on for size: You are a male worker, and another male worker starts making sexually suggestive comments.

Someone you see every day, someone you can’t avoid. And when you complain to your boss, she says, “What’s the matter? I should think you would be flattered by Bruce’s attentions.”

And why is Anita Hill only coming forward now, so many years later?

For the same reasons that I didn’t sue, and didn’t talk about it publicly until now. Ten years ago, nobody talked about sexual harassment, about child abuse, about rape. If it happened, and you did talk about it, you were breaking the code – and society has a way of punishing those who break the code that are often more effective than the punishments doled out to the abusers.

What would have happened if Hill had come forward then? At best, a slap on the wrist for Thomas – and blacklisting for Hill. She would have had a reputation. Nothing would ever be said directly, of course; but search committees would hear, “Anita Hill? She’s a troublemaker. Not a team player.” I doubt very much if Anita Hill would be a professor of law today had she pushed a suit against Thomas.

Why am I coming forward now, after all these years?

For the same reasons.

Because enough is enough.

Because silence is the ally of the abusers.

Because the situation I went through, and the situation Anita Hill describes, is simply unfair, and no one else should have to go through that.

And because if, by coming forward, one less man or woman has to go through the agony of sexual harassment, it will have been worth it.