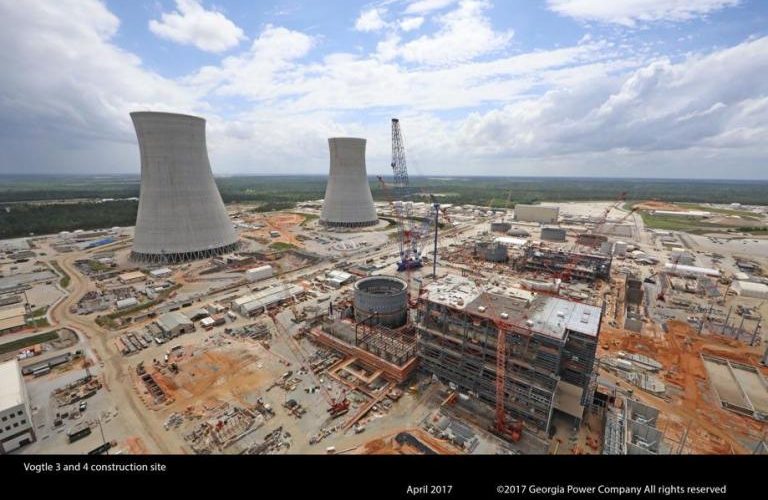 When centrists insist we need to build more nuclear power plants as part of the decarbonization push to prevent climate change, they ignore two very important things: New nuclear power plants are fiendishly expensive and have a lousy track record of getting built on time. Or even at all. Southern Company’s Georgia Power division started building its new Vogtle nuclear reactors in 2009, with expected completion in 2016. It’s now three years later, the two reactors have been delayed till 2021 and 2022, and now Georgia Power is asking to delay reporting on whether or not those delayed openings will once again be delayed. 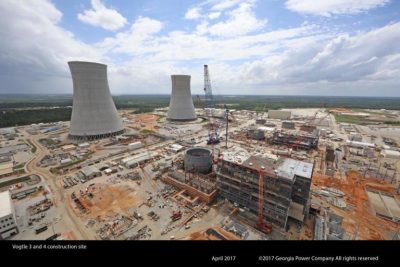 The cooling towers for Plant Vogtle reactors 3 and 4 rise above the construction sites. GEORGIA POWER

Georgia Power is supposed to be reporting every six months, with the next update due later this month. But new reports indicate that Georgia’s Public Service Commission regulators have asked for a six-month delay because the commission has “an extra heavy caseload and plans to increase monitoring”. (If that sounds odd to you … it should.) Georgia Power was happy to agree, but not everyone is on board.

“The company and the project do not deserve this break in scrutiny at this critical time,” Sara Barczak, a director for the Southern Alliance for Clean Energy, told the Atlanta Journal Constitution. “The ratepayers do not deserve this extended period of a lack of protection and transparency as their exposure potentially increases by more than a billion dollars.”

“There is a lack of transparency in what is happening with schedule and budget at a time when the legislature could take some action,” added Liz Coyle, the executive director of Georgia Watch, noting that if they move to an August report that will push it out beyond the end of the current legislative session.

The Augusta Chronicle lays out all the ways that Vogtle is screwing the people it’s supposed to serve:

Wait, you say, what’s that last one?

Oh, didn’t you know? When Georgia Power builds a megaproject like a nuclear reactor, it’s not costed out the way a normal company operates. Instead of building the project, generating power, and making a profit by selling it to its customers, under the Georgia Nuclear Finance Act , Georgia Power gets to start collecting financing costs — and profits! — before it even breaks ground.

Anne Maxwell of Augusta’s News Channel 6 explains what that means for the average Georgian:

“The average household pays about $100 a year, so close to $500 [over the 5 years of delays] for the average residential household,” said Liz Coyle, the executive director of consumer watchdog group Georgia Watch.

According to Georgia Watch, 75 cents of every dollar you pay for the project goes toward company profit and income taxes on that profit. That means the average residential household in Georgia has already paid about $375 to go toward Georgia Power’s profit and taxes on it since 2011.

Coyle says people could be charged for it and never get any power. Even if the project comes to a halt, ratepayers would still be responsible for the sunk cost, she says.

Think again. There’s no guarantee the plant will EVER be finished — in 2017, SCANA gave up the ghost on two South Carolina nuclear plants after pouring $9 billion into a giant hole in the ground (for which their ratepayers are still paying). If Vogtle ends up going down that same route, Meteor Blades points out, EVERY American taxpayer is on the hook thanks to $8.3 billion in federal loan guarantees:

“U.S. Department of Energy officials said Sunday they might require Georgia Power and Oglethorpe to pay back $5.6 billion of the loans within five years under an accelerated timeline if the project were shut down. Currently, they have 25 years to do so. If they decide they can’t pay, you know who gets the bill.”

Even the Union of Concerned Scientists, in a report called The Nuclear Power Dilemma: Declining Profits, Plant Closures, and the Threat of Rising Carbon Emissions that pushed for continued nuclear power as a key part of decarbonization (and suggested subsidies to keep unsustainably unprofitable nuclear plants going), avoided the issue of new nuclear plants.

“Not surprisingly, it has been widely welcomed by nuclear advocates, who interpret the report as essentially saying “yes to nuclear power” in order to reduce carbon emissions,” writes M. V. Ramana at Scientific American.

“But that interpretation misses the many important but less prominent insights in the UCS report… Nuclear plants are hugely expensive, and it has been known for a while that they are not an economically competitive choice. Thus, building new nuclear plants makes no sense.

“In the UCS report too, the power planning model used does not recommend constructing new nuclear plants, even at the highest assumed price of carbon. The authors, unfortunately, do not highlight this outcome of their modeling, sidestepping its implications by not ‘assessing the potential role of new nuclear plants in meeting long-term emissions reduction targets’.”

The World Nuclear Energy Association and their allies keep beating the drum for their uniquely expensive and toxic form of energy:

“To control carbon dioxide emissions and associated climate change, the world must rapidly reduce its dependency on fossil fuels. Nuclear energy is low carbon, and can be deployed on a large scale in the time frame required. Its expanded use – as part of a portfolio of clean energy technologies – is essential.”