“If you want to do something good for yourself, go to Utah and get thrown out.”

U. Utah Phillips knows from whence he speaks. In 1968, he got 6,000 votes as the Peace and Freedom Party candidate for the U.S. Senate from Utah (Eldridge Cleaver headed the national ticket as Presidential nominee). For some reason, in 1969 Phillips found himself persona non grata in Mormon Utah.

He left – and ended up becoming a nationally-know (or at least notorious) raconteur, folksinger, and Union activist with the Industrial Workers of the World – aka, “The Wobblies”.

Which was how it happened that he found himself in Washington, DC (“Or Mordor, as we like to call it”) recently, on a special mission to pick up a very unusual parcel: the ashes of Joe Hill.

For those unfamiliar with “The Ballad of Joe Hill,” or the Wobblies, Phillips is glad to explain. After all, stories and songs are his living. 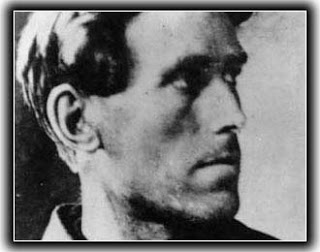 “Joe Hill was executed by the state of Utah, essentially for writing songs,” he says. “He was the Wobbly Bard.”

The IWW was doing organizing up in the silver mines, and the governor of Utah had vowed to break the union. Joe, an organizer as well as a songwriter, was framed on a murder charge and executed.

His final wish: that he be cremated and his ashes scattered in every state but Utah. He is also reputed to have asked his friends to get his body over the state line into Wyoming, so he wouldn’t “be caught dead in Utah.”

(This is trademark Utah Philips: Tell ‘em a story, make ‘em laugh, and then slip in the message.)
Joe’s last request to his friends has become famous: “Don’t mourn, organize”.

It was that business about scattering his ashes, though.

“An extraordinary experience, you know, to have Joe’s ashes in my hand,” he said, simply. “They were so kind to me. The woman down at the National Archive was a mole back in the inner recesses, by name Aloha South. She’d been there 27 years. The ashes were in a little ceramic jar. And there was the torn envelope.”

But what were the ashes of Joe Hill doing in the National Archive? With Aloha South’s help, Phillips was able to piece together the story of the lost, lonely packet.

“We were in the first world war in 1917, and there was a big red scare,” he said. “They passed the Espionage Act June 15, 1917, and the FBI, through the Postmaster General, sent out the word to postmasters all over the country. They got in the habit of taking anything they thought looked suspicious and sending it to the FBI.”

Joe’s ashes were parceled out into 47 packets for mailing to to the various states. But one of the packets became torn during the mailing, and the suspicious Chicago postmaster alerted the Feds. Perhaps it was illegal to mail an anarchist over a state line…

The ashes found their way into the National Archive in 1944. Their existence was common knowledge in the archive, but the world outside didn’t find out until last year, when the catalogue was published, and someone noticed and notified the IWW. The last of Joe was rescued from a bureaucratic burial, which left the question: What do with him?

“I really think the ashes ought to go to the farm workers in California”, was Phillips’ opinion. “That’s a living struggle with a superb record, consistent with what Joe and the IWW is about.”

Actually, he had another idea… inspired when an old-timer came up at a concert and asked, “Could you do a couple of lines of ‘Joe Hill’?”

“Well,” said Utah, laughing through his grey Santa Claus beard, “we could get a mirror and a razor blade… don’t tell anyone in my union I said that. They’re a humorless bunch.”