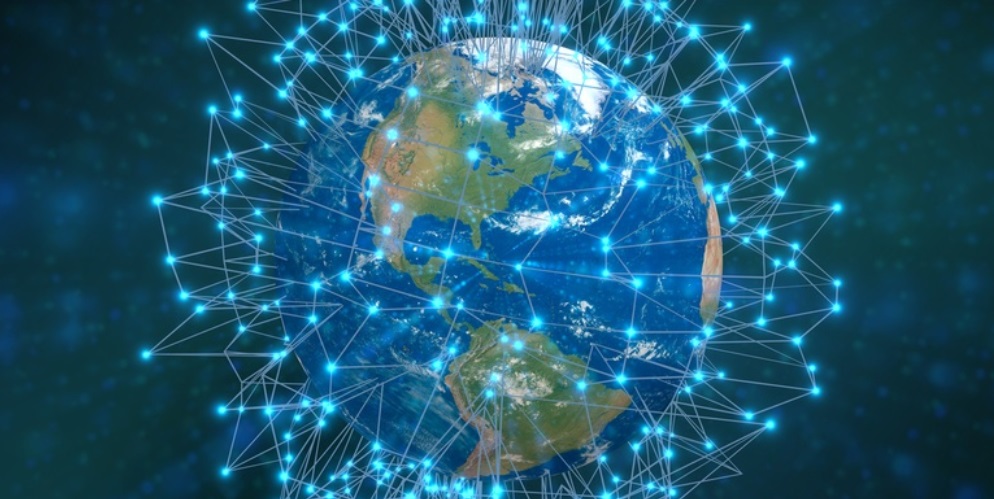 The future of accounting – and accountability

A blockchain is basically a digital ledger that anyone can add to – but no one can edit or delete entries. It creates an indelible record, which is pretty much the holy grail of financial accountability. When noone can go back and make changes, you have a perfect record, and when anyone can view every entry, you have perfect transparency.

Deloitte has a white paper they’re pushing (it even crops up in Google ads, so they must be pretty serious about it): Will blockchain transform the public sector?

…The potential is enormous: Some see blockchain “bringing us the Internet of value: a new, distributed platform that can help us reshape the world of business and transform the old order of human affairs for the better.” …By reducing dependence on existing intermediary institutions and their accompanying layers and costs, blockchain can potentially eliminate significant resource burdens. And by accelerating transactions and simultaneously lowering their costs, blockchain can help to eliminate layers of redundancy, ease regulatory compliance burdens, introduce recordkeeping efficiency, and generally smooth government operations across a number of areas.

So it’s understandable that the big firms that act as trusted intermediaries – particularly in the areas of accounting, auditing, and insurance – would want to make sure that they’re on the cutting edge of this new tech. But two of those companies definitely stand out: Deloitte, and Ernst & Young. Here’s a snapshot of their current blockchain-related job openings that pretty much tells the tale: 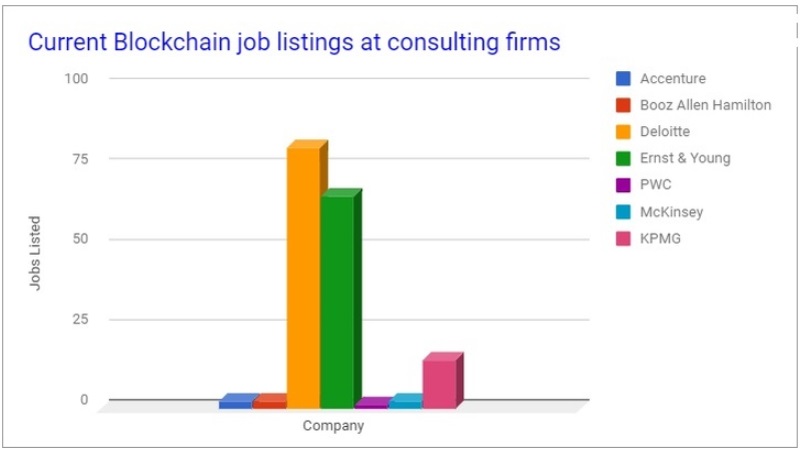 Deloitte launched their Blockchain Lab – first in Dublin in 2016, then last year in New York. “The technology likely to have the greatest impact on the next few decades has arrived. Innovating across a rapidly accelerating range of use-cases, empowering consumers, organisations, regulators alike to connect and exchange value in more dynamic, efficient and immediate ways …Our Global Blockchain community of practice includes more than 800 professionals across 20 countries. We have developed over 30 blockchain-related prototypes, covering a multitude of use cases such as sharing genomics and clinical data, pharmaceutical supply chain, digital identity, cross-border payments, trade finance, and loyalty and rewards programs, as well as distinct efforts for the investment management and insurance sectors.”

Ernst and Young launched their New York-based blockchain lab last April: “Our EY Ops Chain vision is to drive the blockchain revolution by integrating finance with operations to industrialize blockchain for businesses”. They’ve partnered with Visa and the Cambridge Center for Alternative Finance to put out a Global Blockchain Benchmarking Study. They also launched a multi-million dollar initiative to quadruple the size of their blockchain teams. “More than 50 EY clients in 15 countries have signed blockchain agreements in industries ranging from logistics, to consumer packaged goods, to banking. Projects in Europe include a private blockchain project with BNP Paribas’ ALM-Treasury department to optimize the bank’s global internal treasury operations, and the launch of an EY wine blockchain in Italy, created by EY and start-up EZ Lab to help document the quality and geographic origin of wines made in Italy.”

KPMG has partnered with Microsoft to pioneer their Digital Ledger Services – which “enable financial institutions to realize the potential of blockchain capabilities in the cloud, including faster and more secure transactions, streamlined and automated back office operations, and reduced costs.” In 2016 they launched a blockchain services suite.They’ve also joined with the much smaller partners of the Wall Street Blockchain Alliance, where the firm will “use its position in the group …to facilitate the growth and adoption of distributed ledger technology across all financial markets.”

As for the others? There’s some talk and a fistful of white papers, but not anywhere near the kind of integrated push from those three, and not much in the way of hiring:

Those other guys had better get with the program. According to Boston-based analytics firm Burning Glass, blockchain hiring doubled last year across the board: 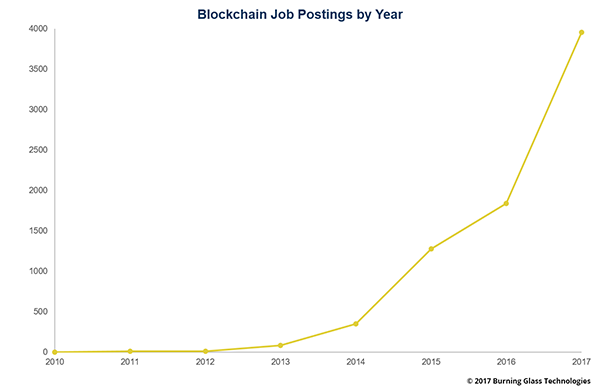 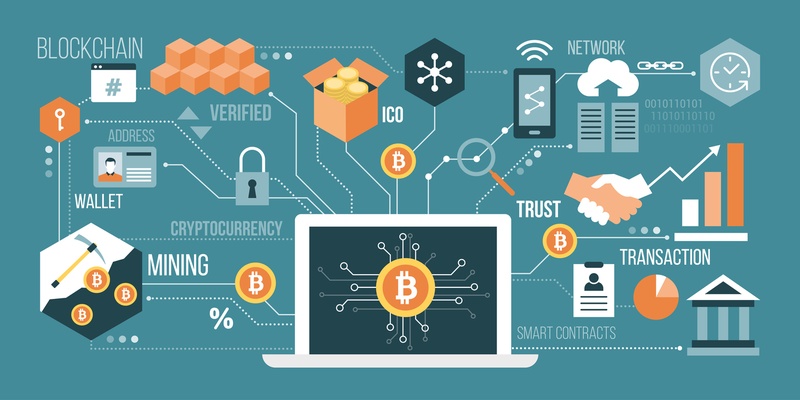