Yesterday, we reported that based on Glassdoor reviews, Microsoft employees (75% of whom are men) are very happy. Today, we look at the downside: the women of Microsoft ($NASDAQ:MSFT) say the company is rife with sexism and misogyny.

The Seattle Times just took a devastating look at Microsoft’s old-boy culture, in an article headlined:

‘I felt so alone’: What women at Microsoft face, and why many leave

Written by the paper’s technology reporter, Matt Day, the story digs through mountains of court filings and interviews to paint a picture of a company that just doesn’t get it. The article sums up the problem as “…a culture of casual sexism, a male-dominated hierarchy slow to change, and poor resolution of grievances.”

We dug into our Glassdoor data archive to see if we could back up some of Day’s findings. Here’s what what our search turned up.

One of the most recent posts, from March 23, is titled “Women beware – hostile work environment“:

The finance organization is a sexist environment. I would discourage talented females for joining the finance role. The environment is one that does not foster an open dialogue… If you prefer to be in a more meritocratic culture, join Amazon.

Create an environment that is more friendly toward women.

Under the heading “Avoid, especially if you are a woman”

Sexism and inappropriate behavior of managers have created a toxic environment for women. Even when escalated to HR, nothing will change as HR only tries for the person who made the claim to go away. The advice from HR consisted of finding a new job… The further down you go the more toxic the work environment becomes. A lot of good people have left because lower and middle management consist of managers that should not be in management.

Everyone is giving praise to the “New Microsoft.” Satya can say all he wants that he’s turning the place around and invests in people – but it’s not entirely true. You have the same VPs running teams there and they continue to perpetuate favoritism and sexism.

Here’s a post from one employee who describes herself as a 10-year veteran. While overall positive on the company, she has serious problems with the culture:

…Sexism: Our group’s leadership were entirely comprised of Indian males. Unfortunately India has a prevalent sexist culture in many places, and this was transferred to our group. I have Indian friends (male and female) who agree with me, so please don’t accuse me of being racist. The women in our group were frequently marginalized and one quit after being told to “shut up and be quiet” during a meeting. Not wishing to cause waves none of them wanted the bother and hassle of reporting it to HR so they just left.

Please protect women. Give them a safe (anonymous?) space to report things. The ones I spoke to knew that our HR contact was good friends with our senior management and complaints (of which there were some) went nowhere.

Some of it is insidious sexism, and some of it sounds like blatant abusiveness:

Let me give you an example…Female/married coworker had a manager making inappropriate inquires into her personal life via another manager. Instead of that manager shutting him down he gave him the information and then told her he was asking about it… Still to much of a “good ole boy” atmosphere.

Or this one, from a software developer in Redmond:

sexism and ageism in the workforce. If you complain, you are marked.

Some male managers are so inappropriate with female stafmembers, its all condoned by management

The culture is in the midst of a shift, but I find it a bit old-school, sexist, old boys club… There needs to be a greater effort to either get old boys club people out or on board with change.

The culture fosters and rewards emotionally abusive behavior from far too many middle managers.

There needs to be a renewed focus on cultivating great middle managers (Director level and above). The fact that a person is good at bullying people into delivering short term results consistently should not outweigh the fact that they are horrible people managers.

You will face day-to-day extreme harassment – bullying, screaming, inappropriate jokes and eventually you will leave because you are a professional

A hush culture for sexual harassment case whilst I was there.

When an employee tells you they are being harassed at work do something about it!!!

To be fair, Microsoft has acknowledged that the company culture has had… issues. And they have done some good work on encouraging diversity. But they appear to have a long way to go.

We’ll give the final word to a Microsoft employee quoted by Day:

“I think Satya Nadella is probably the best thing that ever happened to Microsoft,” said Ellyn Foltz, a former sales manager who left at the end of 2014. “But having been an executive in the technology industry, you don’t make deep, important cultural change without owning up to what’s going on. I don’t think that’s happening at Microsoft.” 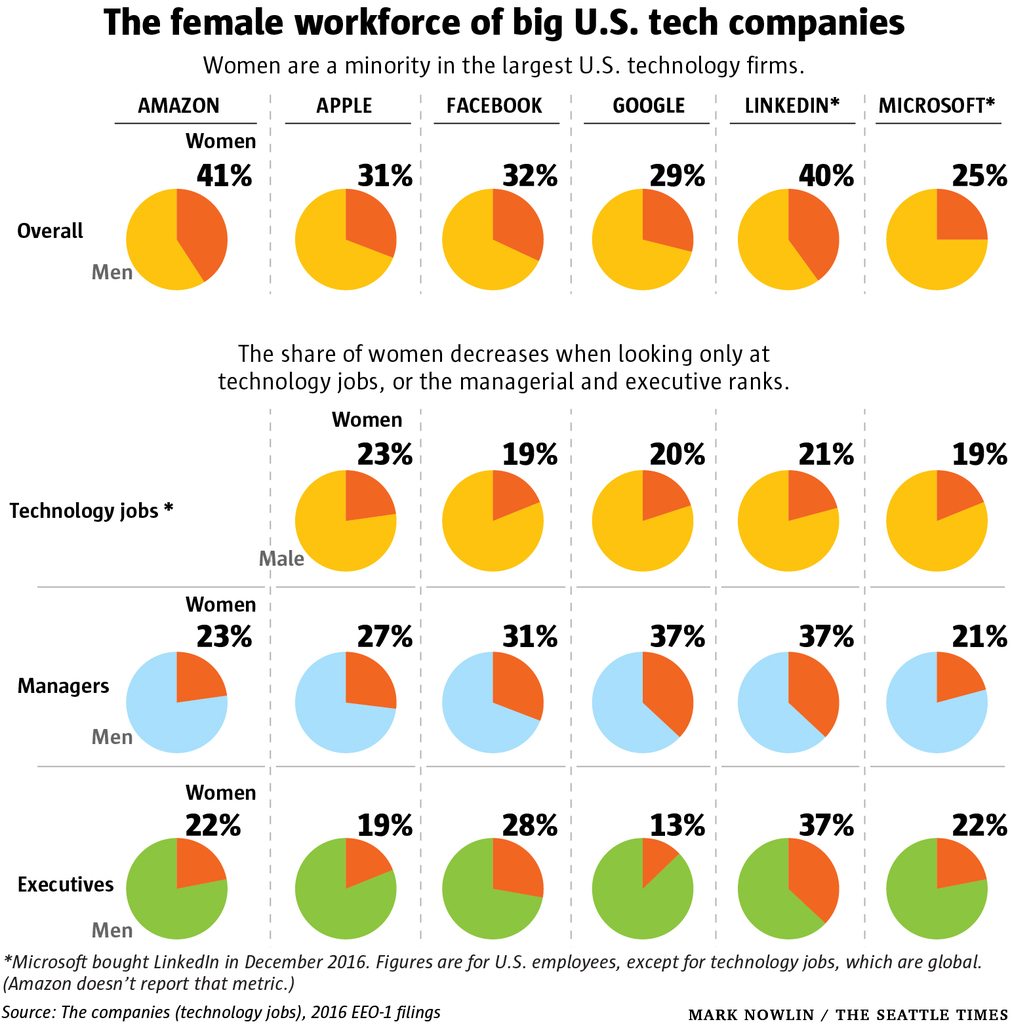