This is a fact: there are a lot more men who are CEOs than there are women. This is also a fact: when women do make it to the top as CEO, they are judged more harshly.

Job site Glassdoor encourages employees to anonymously rate their companies. These ratings include employer business outlook, work environment, and, for our purposes here, how employees rank their CEO. There are just three grading options: Thumbs up, thumbs down, or neutral. Last year, Glassdoor came out with its 2017 list of 100 top-ranked CEOs. The results — perhaps not surprisingly — are telling.

Six male CEOs saw near-perfect 99% ratings. Not a single woman CEO scored that high – in fact, there weren’t even a total of six women in the 90s. 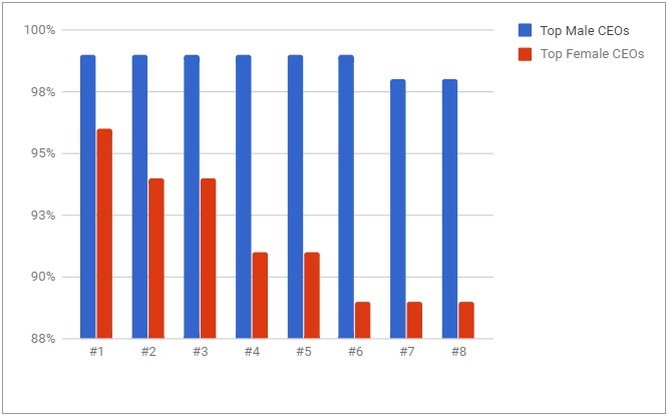 Why are we giving you the top 8, rather than the top 10? Because out of Glassdoor’s top-100 (which features all CEOs who scored an 89 or better) there were only 8 women.

The highest-ranked woman, Pamela Nicholson of Enterprise Holdings, scored a respectable 96%, but that score didn’t even get her into the top 20. As you can see from the chart below, she sits at #21. The 7th and 8th women barely make the list at all, ranking #99 and #100.

This phenomenon isn’t limited to the US. Across other major industrial countries, the number of female CEOs who earn top rankings on Glassdoor’s surveys is as low or lower:

Glassdoor rankings, number of women among the top CEOs:

Put another way, out of the entire world of business, 90 men get an A grade, compared to just 7 women. Is it really possible that only 7 women deserve an A? It’s not as if female CEOs are demonstrably worse performers – quite the opposite:

It’s also not because women don’t have what it takes. Another study, this one from the Ketchum Leadership Communication Monitor, interviewed 6,500 people in 13 countries on what qualities they felt made the best leaders. It found that folks were sick of the the “macho infallible, omnipotent, know-it-all leader”.

The result of this huge disparity between the expectations we have of our leaders and their actual leadership performance is an enormous disaffection with leadership of every kind. Among the 6,509 members of the public surveyed in 13 countries across five continents, we found a growing hunger for a model of leadership characterized by openness, transparency, respect and clear values — coupled with a willingness to admit mistakes, a determination to find solutions and a commitment to matching words with deeds.

There were a total of just 32 women heading Furtune 500 companies as of June last year, a new record. But since then, 6 of them have left or lost their positions.

Both Fortune and Forbes have recently published “Top women in business” lists. Here’s how their employees rank them: 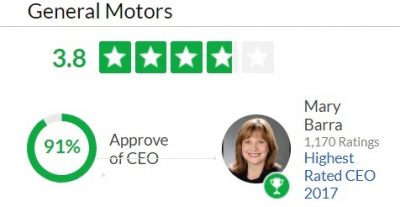 Mary Barra of General Motors is a success by every conceivable measure: GM profits are up (aside from a one-time hit from the sale of its German Opel unit), the company’s crossover SUVs are selling well, and it’s launching well-regarded efforts in the EV and automonous car spaces. Fortune magazine named her the #1 Most Power Woman in Business for the third year in a row. Forbes ranks her at #1 most powerful woman. She’s also the top-paid auto CEO, with a 2016 package of around $22.6 million.

The next 3 CEOs score an A rating with Fortune, but only get a B from their employees: 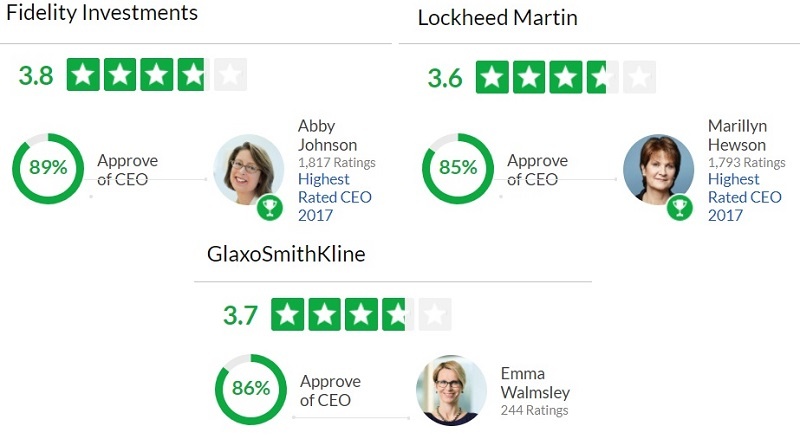 There are several woman CEOs grouped together in the mid-70% range — decent scores compared to Glassdoor’s stated average of 65%, but certainly not in the 95%+ range so many of their male counterparts received.

Last year, IBM’s Virginia Rometty was the only woman to make the USA Today’s list of top 10 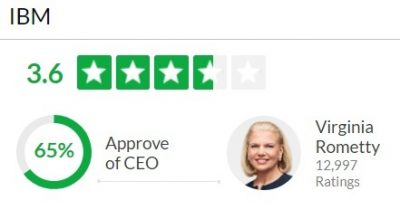 highest-compensated CEOs – her 2016 compensation of $32.3 million put her #8 on the list, behind Time Warner’s Jeffrey Bewkes ($32.6 million) and way behind the #1, Thomas Rutledge of Charter Communications with $98 million (all figures for 2016).

But as for job approval? A mediocre C.

How about the trend over time? It’s mixed – scores for some female CEOs, like Phebe Novakovic at General Dynamics, have improved substantially, but others are down. 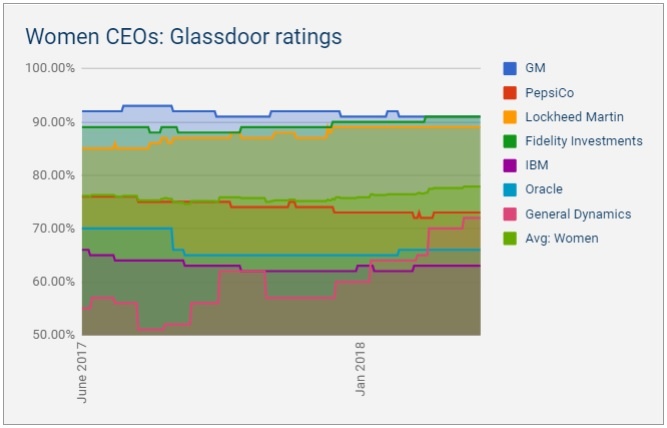 Writing at FiveThirtyEight.com, Carl Bialik noted, in the wake of Hillary Clinton’s unexpected 2016 election defeat, that there was more than the overt and obvious sexism at play in the way many people evaluate powerful women.

Two recent studies of voters, however, suggest that another, subtler form of bias may also have been a factor in the election. These studies looked at what’s known as “implicit bias,” the unconscious tendency to associate certain qualities with certain groups — in this case, the tendency to associate men with careers and women with family. Researchers have found that this kind of bias is stronger on average in women than in men, and, among women, it is particularly strong among political conservatives.

…Measuring implicit bias is tricky — because the bias is unconscious, you can’t just ask people how they feel about women in a professional context, or about sexist attitudes… At every level of self-reported political ideology, women had a higher level of implicit gender bias than men… Gender bias scores vary by age, race and year the test was taken as well as by gender and political ideology. Teenagers had the least bias, while people 55 and older had the most. 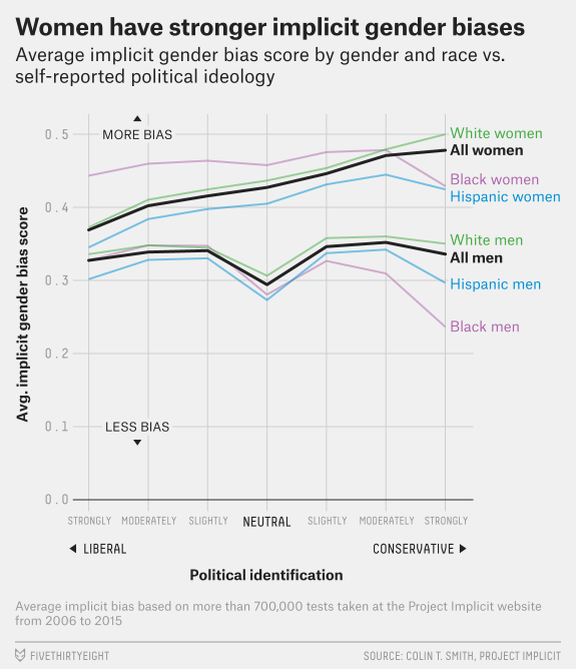 What does this mean for women CEOs?

It means that they are held to a higher standard. It means that when in an anonymous, online environment like Glassdoor, many employees who would be perfectly ready to give a thumbs-up to a male CEO would vote thumbs-down for a female CEO of equivalent talent and ability.

It also means that female CEOs are less likely to rise to that level in the first place.

Harvard Business Review analyzed women CEOs, looking to answer the question: What can we all do differently to get more women into top jobs? They found that in order to get there, women CEOs had worked harder, longer, and came to their jobs with more experience than comparable male CEOs.

And once they do make it to the top – they’re more likely to get fired. Shirley Leung, writing at the Boston Globe, calls it the Glass Cliff:

According to a 2013 study of 2,500 public companies by consulting firm Strategy&, over the previous 10 years, a higher percentage of female CEOs (38 percent) were forced out, compared with men (27 percent)… Take it all in, and it seems that female CEOs face a double standard in the way they are hired and fired.

And here’s some big picture: There has been a severe drop-off in top-compensated women CEOs over the past year. Last May, Business Insider ran a feature, The 30 Highest-paid CEOs in Tech. Only 5 of the 30 were women. Since then, 3 of those 5 have moved on:

The good news: The younger people are, the less implicit bias they seem to have. As the old guard retires, it’s possible the replacement workforce will think less about the gender of their leaders and more about their accomplishments.