UPDATE: With the news of Toys R Us closing the remainder of its stores, we run this piece again. It originally ran a month ago, after Toys R Us closed 180 locations. We saw what was coming, and predicted that the thing that would bring down the company wasn’t Amazon or e-commerce, but instead the fact that the company had been saddled with insane amounts of debt when it was bought out by private equity firms.

There’s a lot of blame being tossed around for the Toys R Us bankruptcy. The company filed for Chapter 11 reorganization last fall, putting a damper on an otherwise decent holiday shopping season, and this week it filed plans to shutter up to 182 of its stores – 20% – as part of the reorganization.

CEO David Brandon blamed competition from Amazon, Target and Walmart in the bankruptcy filing, but Anne D’Innocenzio’s AP story on the closings lay the blame squarly at Amazon’s feet:

Amazon, meanwhile, has been using its $99-a year-Prime Membership as a way to gain fierce shopper loyalty as it adds more perks like same-day delivery Amazon Now for a growing number of markets. It’s also making partnerships with brands like Sears and Kohl’s, and now has hundreds of Whole Foods stores that it could use as distribution points…‘‘Amazon has the level of convenience that so far surpasses the ability of traditional retailers can offer,’’ said Karl Havard, a retail industry expert for PA Consulting Group, a global retail consultancy. ‘‘There’s a lot of inertia in the retail boardroom. They’re not prepared to take the risk.’’

But her story also notes that “GlobalData Retail estimates that about 13.7 percent of toy sales were made online in 2016, up from 6.5 percent five years ago”. That’s enough to cut into margins, but it’s not enough to kill a global chain.

So if not Amazon, then who? Here’s a map of all the stores Toys R Us is planning to close: 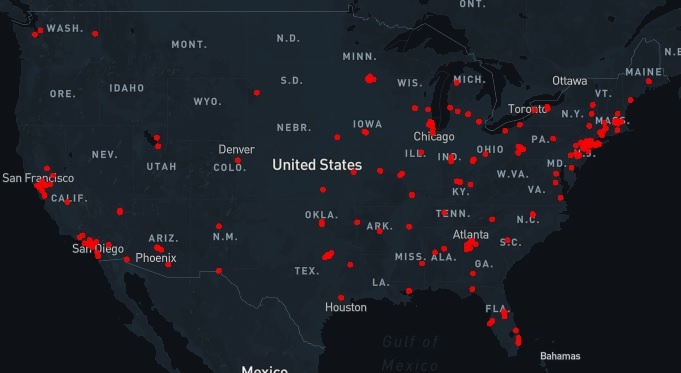 The one thing every single one of those red dots has in common: 100 percent are within 15 miles of a Walmart or Sam’s Club.

Walmart hasn’t been doing great either. They just shut down 63 of their Sam’s Club stores, and their sales have been hurting. But maybe, just maybe, having so much giant box retail stacked practically on top of each other was never going to be a good thing for the bottom line?

Toys “R” Us may have set itself back when it signed a 10-year contract to be the exclusive vendor of toys on Amazon in 2000. Amazon began to allow other toy vendors to sell on its site in spite of the deal, and Toys “R” Us sued Amazon to end the agreement in 2004. As a result, Toys “R” Us missed the opportunity to develop its own e-commerce presence early on … it only recently announced plans to revamp its site, which it established in 2006, and pledged a mere $100 million to its e-commerce efforts over the next three years. As this example shows, overlooking the importance of an online presence could prove a disastrous move for retailers, especially as digital sales are estimated to reach 15% of all retail sales by 2021.

But Anthony Noto of the New York Business Journal writes, “Bankrupt Toys ‘R’ Us was crippled by Bain, KKR debt — not Amazon”.

Toys “R” Us’ troubles also stem from when it became a private company back in 2005 by its LBO-firm owners — Bain Capital (co-founded by 2013 U.S. Presidential candidate Mitt Romney) and KKR (NYSE: KKR) (under the helm of co-CEOs Henry Kravis and George Roberts).

Both companies left the chain vulnerable by saddling it with a heavy debt load, just like Bain did with KB Toys more than a decade earlier.

Toys R Us has been profitable, it just hasn’t been able to handle the crippling $400 million annual debt service. Bloomberg notes that the buyout firms did quite nicely, pocketing $470 million in fees and interest payments.

KKR, Bain and Vornado purchased Toys “R” Us in 2005 in a $6.6 billion leveraged buyout, but more than $5.3 billion of the purchase price was paid using debt. Toys “R” Us has adapted to many changes in the toy industry since Charles Lazarus started the company as a baby furniture store in 1948, but spending $400 million annually to service its debt made it impossible in 2017 for Toys “R” Us to deal with the competition coming from online and big box retailers like Amazon and Wal-Mart … Whatever business expertise Toys “R” Us’ owners brought to the company did not help the retailer avoid bankruptcy court.

“The company’s overleveraged capital structure has constrained it from making necessary operational and capital expenditures, including investing in the revitalization of stores,” Brandon noted whistfully in his bankruptcy filing. “As a result, the company has fallen behind some of its primary competitors on various fronts.”