Tech is bringing tectonic shifts to the financial landscape. Which of the old-guard dinosaur firms are adapting – and which ones are sinking into the ooze?

“Almost every type of financial activity,” writes Evan Bakker at Business Insider, “from banking to payments to wealth management and more — is being re-imagined by startups, some of which have garnered blockbuster investments. Meanwhile, the old guard is trying to solve a puzzle presented by the fintech revolution: How can they benefit from the rise of digital, and how can they avoid obsolescence?”

Maybe a battlefield isn’t the right metaphor, though, because there are no swords here – instead, banking firms are fighting their own internal cultural battles. When it comes to tech, the bottom line is talent, vision, and the willingness to move fast to take on new challenges. Tech companies are known for having these characteristics. Large financial institutions? Not so much.

Which may be why JPMorgan CFO Marianne Lake says her firm isn’t just a bank – “We are a technology company“.

Here’s Bloomberg’s Matt Levine watching in awe as one of the world’s top bankers reinvents Goldman Sachs right before his eyes:

Yesterday Goldman Sachs Group Inc. Chief Executive Officer Lloyd Blankfein presented at the Credit Suisse Financial Services Conference, and his presentation is kind of a weird read. The running theme is that Goldman is doing technology stuff to win business. “Engineering underpins our growth initiatives,” says a summary page, and it doesn’t mean financial engineering. In fixed income, currencies and commodities, engineers are 25 percent of headcount, and the presentation touts growth in Marquee (its client-facing software platform) and “systematic market making.” In equities, Goldman touts its quant relationships. In consumer banking (now a thing!), the centerpiece is Marcus, Goldman’s online savings and lending platform. And in investment banking, “Engineering enhances client engagement through apps, machine learning and big data analytics.”

What’s standing in the way of an agile renaissance in banking and finance? Nothing but the way banks have done business for hundreds of years. While banks are notorious for paying gargantuan salaries to some sectors of their workforce, they are notorious for underpaying for tech. And that’s costing them.

The Financial Brand reports that top talent is voting with their feet… to the actual tech sector. No matter how many times bankers say “we’re actually a technology company”, they don’t seem to be willing to commit to the salaries that would take:

In 2011, 27% of Columbia University MBA graduates went into banking. By 2016, that percentage had fallen to 14% — half the number seen only five years earlier.

…According to Glassdoor, the average salary for a data scientist is $128,549 a year. Even an entry level data scientist makes a hefty $118,748. But if they go to work for a tech giant like Google, Amazon or Airbnb, they can expect to earn much more.

Who’s hiring? We run down some data

Let’s take a look at some job numbers from some of the top banking houses, culled from our Thinknum data troves.

“Engineer” is a word that comes up – a lot. But those include low-paying gigs like Engineer Analyst – Glassdoor says a typical salary is just $67,000: 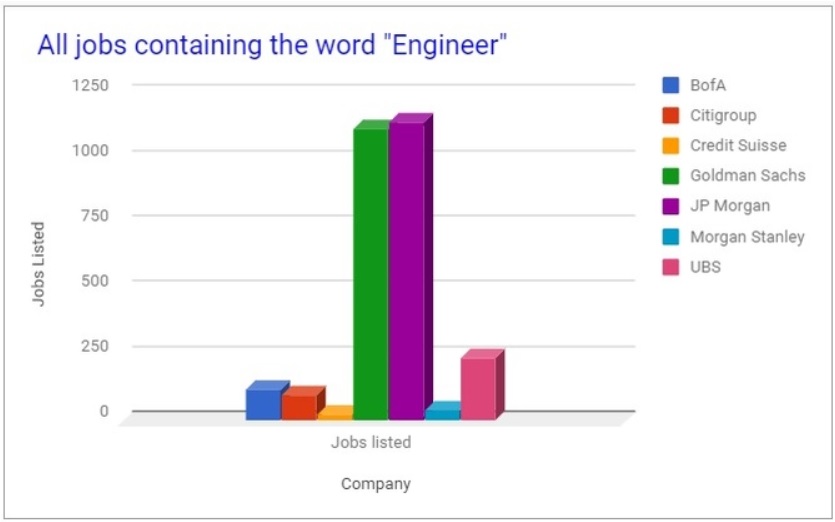 The trend is on a pretty clear uptick for JP Morgan, as well (and not so much for the others): 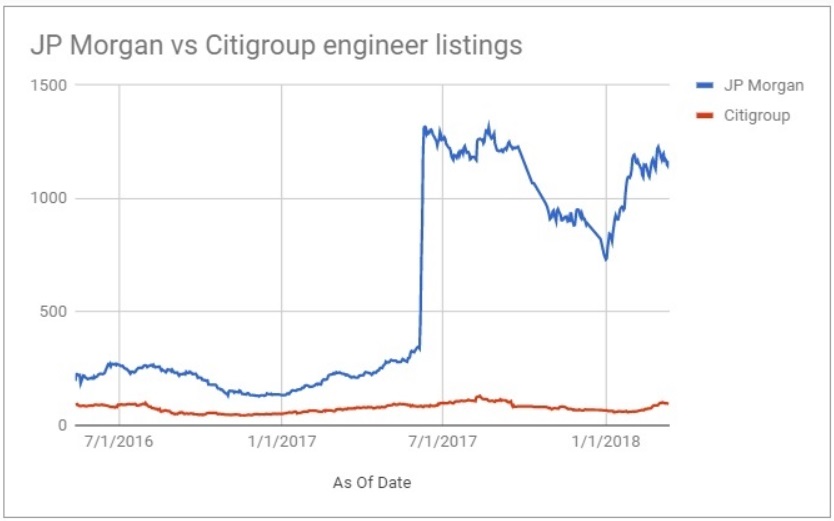 And how does that compare with the various companies’ total job listings? 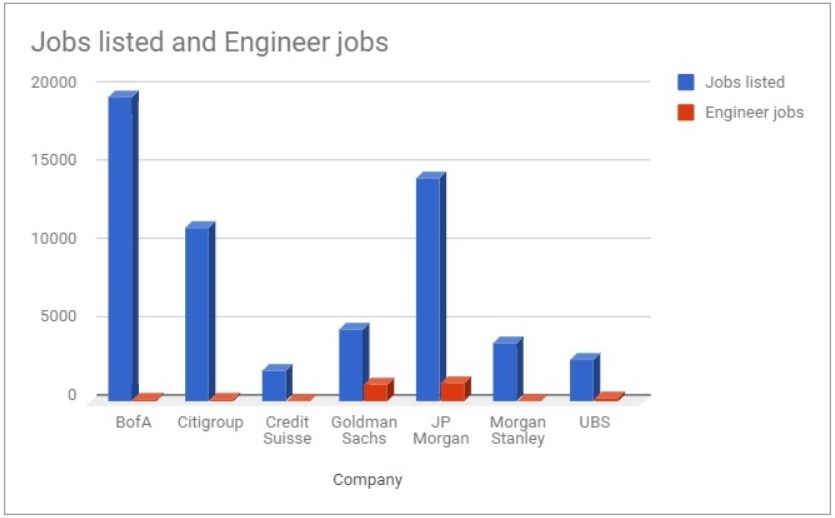 Perhaps a table will help you visualize this, but it’s pretty apparent that both Goldman and JP Morgan are making the most serious effort here:

Likewise for job listings that include the word “Software”: 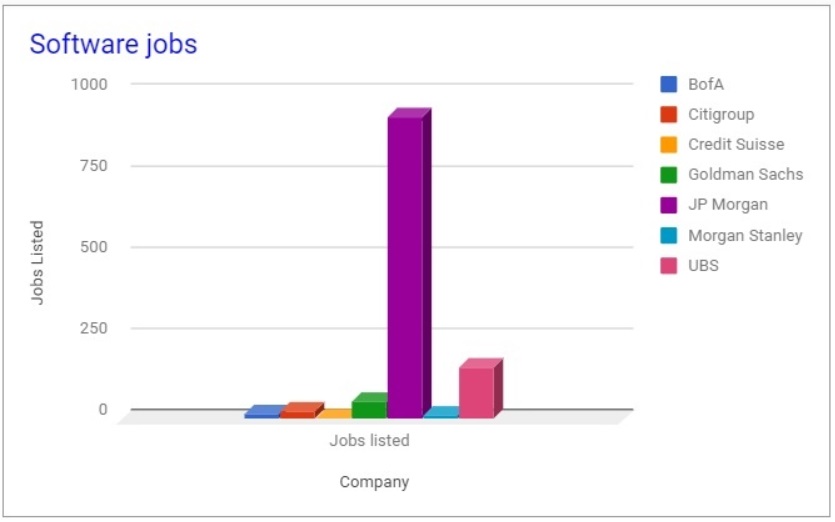 How about some of the more data-centric hires? “Data” in general shows up in the job titles pretty frequently: 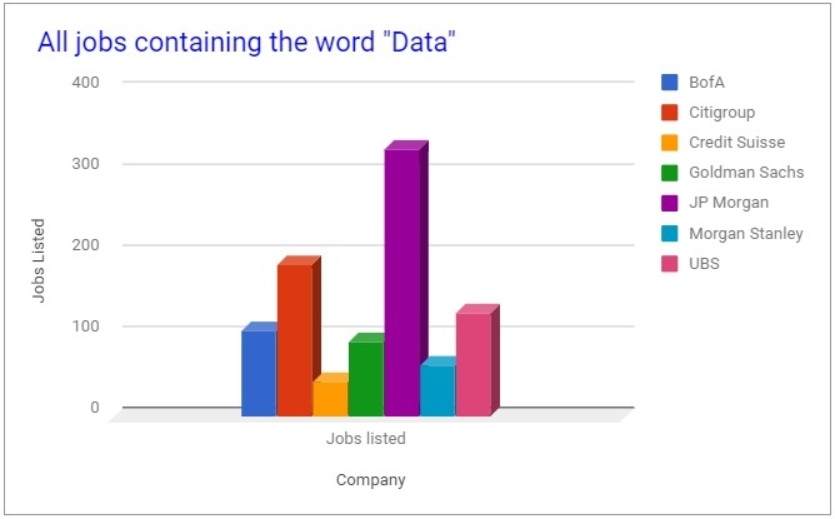 But what about the roles that consultant Capgemini identifies as among the top-10 critical hires that banks will need to bring in over the next couple of years if they’re going to stay competetive? The outlook there is not as healthy (make sure to check the labels on the Y axis from chart to chart): 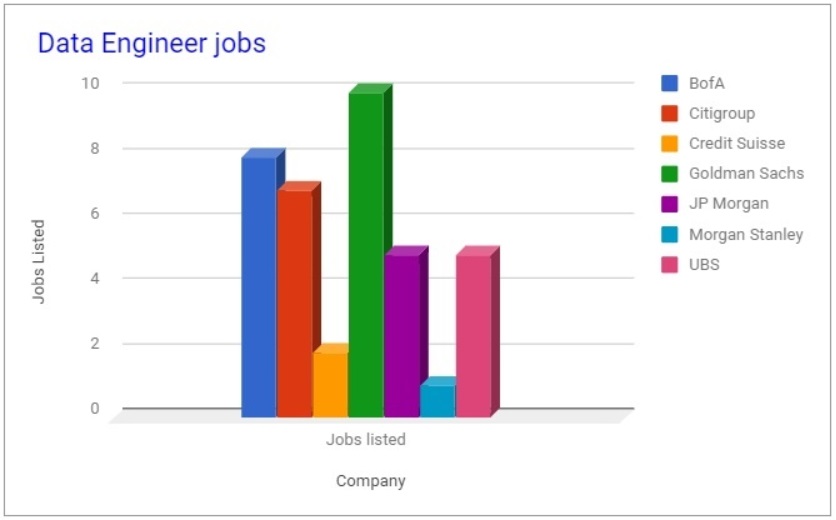 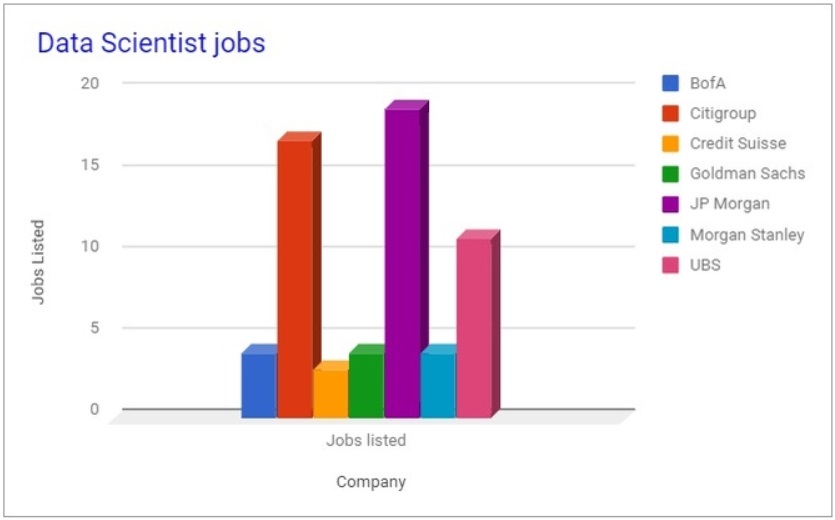 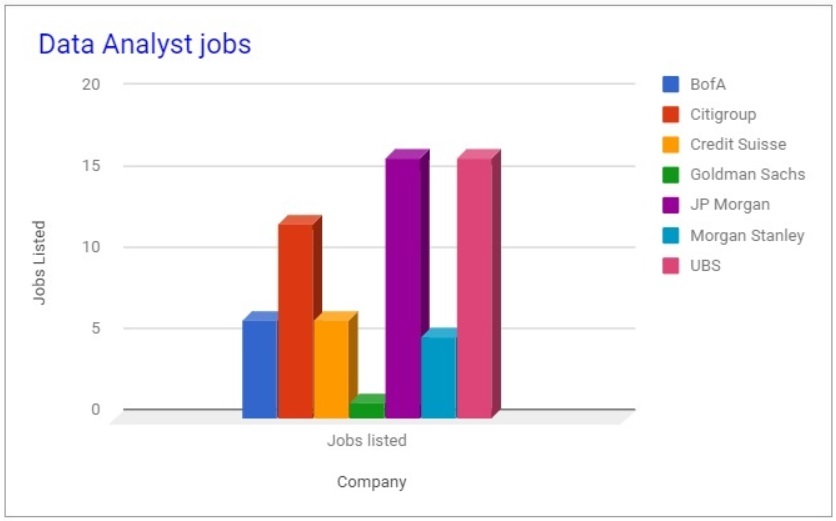 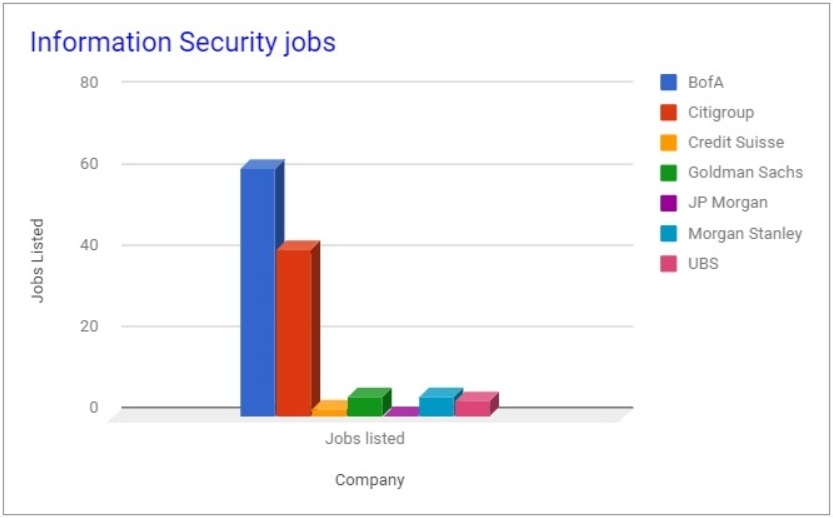 Blockchain. It may just be the hottest buzzword of the moment, but it’s also a touchstone for banks that are taking tech seriously. All the big consulting firms are looking at ways to utilize the inherent advantages of blockchain, as are old-line computer dinosaurs like IBM.

So where are the big banks? JPM has a meager 15 openings for blockchain over the past month. Here’s the entire picture for the past year: 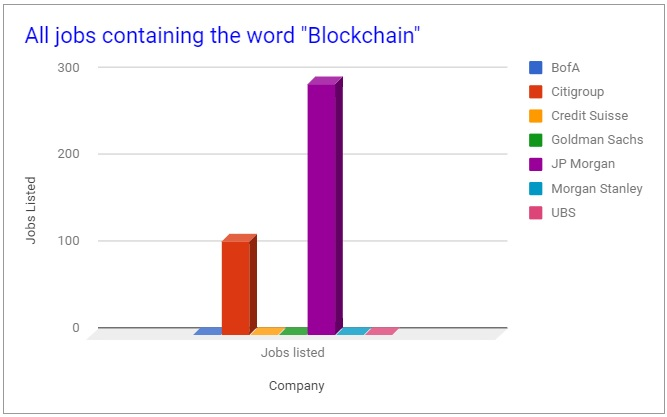 Over at tech community Hacker News, “nostrademons” made this wry observation on the quaint notion of banks making claims like “We’re not just a bank, we’re a tech company”:

The old “We are a tech company, we just happen to do retail/advertising/communication/ movies/hospitality/transportation/payments better than you idiots” seems to be working pretty well for Amazon/Google/Facebook/Netflix/AirBnB/Uber/Lyft/Stripe.

Aside from Goldman and JP Morgan, it looks like most of the big financial houses still have a long way to go. Watch this space in the coming weeks as we continue to evaluate which firms are moving into the future – and which aren’t moving at all.