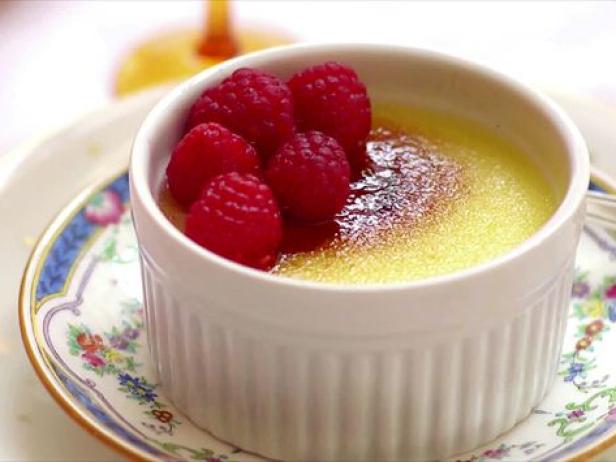 Once upon a time, there was a magic, strawberries-and-cream place.

Gentlemen and ladies sipped champagne in the afternoon sun as they watched magnificent horses gallop by. They stayed in colonnaded hotels or large houses bedecked with fanciful architectural gingerbread. At night they danced and gambled and ate.

This was the Victorian heyday of Saratoga Springs, in which everyone lived by Oscar Wilde’s dictum, “Nothing exceeds like excess.”

The Saratoga Springs of today is hearkening back to that era. In the land of the health-conscious, the fat-reduced and the cholesterol-free, Saratoga remains a haven of nostalgic decadence.

Consider the creme brulee at Sperry’s, the narrow ‘30s-style restaurant on Caroline Street. A tiny, 4-inch ramekin sits on your plate, wafting to your nostrils the delicate aroma of caramelized sugar. Pick up your spoon. As you would 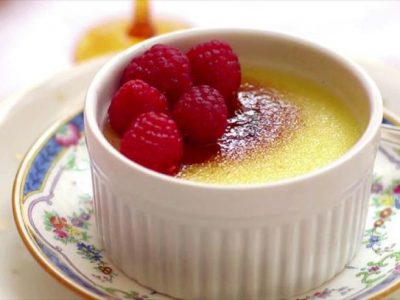 with a soft-boiled egg, break the sugar shell; dip the spoon deep into the soft yellow custard within. Shell and filling enter your mouth, the first crunchy and sweet, the latter smooth, creamy, rich with the flavor of vanilla fresh from the bean.

What you’re eating here is heavenly. Don’t even think of the ingredients: the egg yolks, the heavy cream, the sugar.

“When people come to Saratoga Springs, they want to do it up properly,” says Gustav Ericson, who for the past nine years has created the creme brulees, lemon meringue tortes, and blueberry bread puddings that have tempted the palates of Sperry’s patrons.

“Maybe Saratoga is a little indulgent,” he adds. “Myself, I’ll eat cheesecake once every six months. Here, we sell so much white chocolate cheesecake I can’t keep up.”

Beverly Cone, proprietor and chef of Beverly’s on Phila Street, agrees that sweets seem largely exempt from the emphasis on healthy eating.

“For lunch,” she notes, “I see them eating a lot more salads this year, more turkey breast, more salmon. Much less beef than they used to. But when it’s time for dessert they’ll order a slice of chocolate Chambord torte. They still go with the chocolate. When they come here, they want to treat themselves.”

And it’s not just the summer visitors who come to Saratoga to indulge. Cone says that business (after a blustery, blizzard-filled winter) has been booming since April.

There are two types of dessert popular this season in Saratoga. On the one hand, you have what you might call healthy decadence: the fruit tarts, the raspberry confections. Beverly’s specialized in this kind of dessert, which 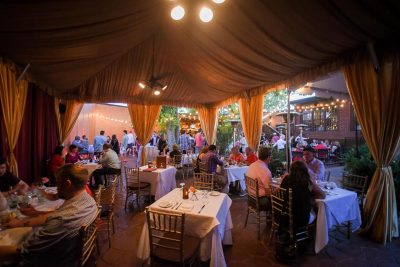 combines the healthful freshness of fruit with the caloric blast of French cuisine – like apple bourbon cake with bourbon butter sauce.

And then there’s chocolate. Chocolate exists for its own sake. A chocolate Chambord torte makes no compromises. It is decadence of the purest sort.

“The people who come out for chocolate always look for the best chocolate,” notes Peggy Boyl, the pastry chef at the Adelphi Hotel. Boyl, who now lives in Ireland, has returned to the Adelphi – the last of Saratoga’s grand old Victorian hotels – this summer, after a nine-year absence. She whips up several options for the lover of deep chocolate, including a chocolate whiskey cake that is an international treat, combining 14 ounces of Belgian chocolate with one-half cup of Irish whiskey.

This is chocolate as it’s meant to be eaten: a long, three-inch-deep wedge of midnight, closer to a fudge in consistency than any mere devil’s food cake. Garnished with ruffles of chocolate that Boyle makes by hand, this chocolate could be savored over an entire evening. It’s a pity most people can’t hold themselves back, instead devouring it in under 5 minutes.

At the 43 Phila Bistro, pastry chef Lena Favalloro has managed to combine the two genres of dessert, in a white chocolate raspberry tart with almond pastry crust.

White chocolate does not possess the strongest of flavors – the stuff is abjured by rabid chocoholics as little short of heretical. In this case, the chocolate is completely overwhelmed by the raspberries, but that’s just fine. The result is something akin to an extremely creamy, rich, fruit custard, with a blend of delicate flavorings, including the trace of chocolate and hints of almond from the crust.

Purists can split off either way at 43 Phila, as Favalloro also makes a sinful chocolate hazelnut coconut tart and a light, creamy lemon-champagne zabaglione. The zabaglione (pronounces zah-bah-yone) is another masterful marriage: tart lemon, fresh blueberries and champagne for that extra zip.

For the quintessentially Victorian experience, though, go for the marjolaine at the Adelphi, straight out of Gaston Lenotre’s classic text of French cooking, “Desserts and Pastries.” Thin layers of hazelnut torte are layered with three different buttercreams: chocolate, hazelnut praline and almond. Smothered in chocolate and garnished with caramelized hazelnut ornaments, this is not just a dessert, it’s an adventure. As the layers blend on your tongue the tastes shift and shimmer as hazelnut blends into almond blends into chocolate.

Try it on the back patio, sitting on a wrought iron bench. Look up at the open, star-studded sky above, and know: this is a true taste of heaven.