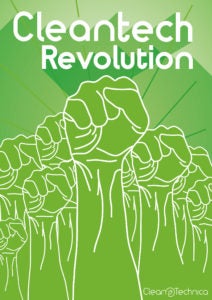 Happy day after Earth Day! We’ve been celebrating this semi-holiday dedicated to the planet we live on (and keeping it green and healthy for all of us) for 49 years now, and during that time, we’ve seen a lot of positive solutions put into place — and we’ve seen some big problems get a lot worse (like climate change). So, this year, we’re inviting you to join us in a Cleantech Revolution — which is focused on getting more people into government who actually understand the problems we face, the solutions we can use, and the tech (both green and otherwise) that we can build them from.

Cleantech is solar energy that, even combined with energy storage systems, is now CHEAPER than building new coal and gas plants.

Cleantech is wind energy that is also cheaper, and MUCH, MUCH faster to get online than new nuclear power plants.

Cleantech is electric vehicles (EVs) that now cost the same amount of money to own and operate as internal combustion vehicles (without delivering a load of particulate matter to your children’s lungs) — or even cost less over time if independent, objective forecasts for resale value are included in the equation.

But We Have A Problem

Too many of the people who are setting the policies that govern our day-to-day lives aren’t scientists.

We have a few folks in office who ARE engineers, who HAVE built solar companies or worked in environmental science.

But they’re outnumbered by folks who don’t understand and don’t WANT to understand.

We Need Better People In Office

That’s where you come in.

The Cleantech Revolution is all about making that happen. It’s about reaching out to cleantech people and encouraging them to run – for offices at all levels of government, from county commissioners and mayors on up to state legislators, congressional representatives, and yes, even presidents.

It’s about helping those people to run, and win – after all, they aren’t politicians and haven’t run for office before. We’re going to help provide them with the tools they need.

For today – sign on to our mailing list by going to our contact page, so you’ll be the first to learn what’s happening with the Cleantech Revolution. Our first emails will be going out soon.

For tomorrow — watch this space — we’ll be bringing you tools and information you can use over the next weeks and months.

Thanks! And have a very happy Earth Week, Earth Month, Earth Year, Earth Decade, and Earth Century! It’s critical that we see every day as Earth Day.