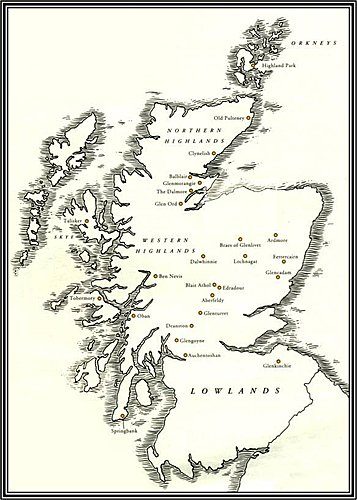 The speaker is our tour guide at the Lagavulin distillery on the isle of Islay, off Scotland’s craggy west coast. He holds a long, snake-like hose that drops down from a pipe in the ceiling of this plain concrete room. Tapping the valve, he spurts a shot of clear liquid into a large copper ewer.

He ladles a little into my cupped hands. I bring it to my mouth. It is harsh, vibrant, crystalline, and redolent of the smoky-oily aroma of peat.

This is whisky, the raw stuff fresh from the still. The water of life, pure and unadulterated.

There are bars that have amazing selections on their top shelf; there are restaurants with cellars full of the most exquisite vintages. But you’re not going to get this anywhere else.

Nobody is sure if it was the alchemists or the monks who first started calling the amazing liquid they distilled from wine “aqua vitae,” or “water of life.” It was clear to them that it has some sort of animating spirit, though. When touched with a candle it burned with an angelic light, and when imbibed – oh, my! – it made men feel like little less than angels.

The Scotts who set up shop as distillers became particularly skilled. And the spirit they created – they translated “water of life” into gaelic and called it “uisge beatha”, shortened to ‘uisge’ and thence ‘whisky’ – has been particularly prized all over the world.

Paying a visit to Scotland is a perfect way to both refine that appreciation for those already delighted by whisky, or to instill it in those just learning. And a visit to Islay (pronounced “eye-luh”) is ground zero. There are three main Whisky-producing regions, each with its own character: Speyside, the main region along the river Spey with dozens of distilleries; Highland, scattered across the Scottish hill country; and Islay. On this tiny, heather-covered granite rock in the ocean, there are 4,000 inhabitants and eight distinctly world-class distilleries.

I start my pilgrimage on the south side of the island, with three distilleries that put out some of the most intensely flavorful whiskies in the world: Lagavulin, Ardbeg and Laphroaig.

There are five elements that determine a whisky’s flavor, and must be carefully controlled by the master distiller. The first step is selecting the finest locally-grown barley, and malting it. This involves sprouting the grain to convert the starches to sugars, making it sweet and intensely flavorful. Next, the malted grains are dried over a slow fire of peat, which adds the first level of smoky peatiness to the blend.

Peat is ubiquitous in Scotland, and particularly on Islay – this moss cousin grows thick on the ground in the damp atmosphere, building up over the years into a deep cushion, springy in some places and squelchy in others. In a land with few trees, peat has been harvested as fuel for centuries – cut with a spade into brick-sized blocks, dried, and then burned.

Peat also adds its distinctive smoky-rich flavor to the second element: the water. Here on the southern part the island the distilleries get their water from the lochs and streams (or “burns”, in the local parlance) that pick up the warm, rich aroma of the peat as they flow through it. The water is added to the malted barley to dissolve off the sugars, then transferred to great oaken or steel vessels called tuns, where it ferments over several days.

The fermenting rooms reek like… a brewery, the kind of smell you get at a frat house after a long weekend when too much beer has been spilled into the carpet. It will take a few steps to arrive at something more pleasant, since the fermenting only takes you to about 8 percent alcohol.

Next it’s time for distillation, a process that was probably first developed by the Greeks of classical times, perfected by Moslem experimenters in the middle ages, and then spread through Europe by alchemists and monks. On the European continent the monks kept the secrets to themselves, but in Scotland and Ireland the monasteries were busted up by Henry VIII, and the monks who were skilled distillers set up shop on their own.

The stills at each establishment are completely unique, the result of two or three centuries of experimentation, trial and error, and careful attention to the tiniest detail. The masters tell us that even such prosaic details as dents and dings in the smooth copper sheathing of the still have an effect on the flavor, and are carefully reproduced when individual copper plates have to be replaced. It’s hard to believe, but then, it’s also hard to argue with the results they get.

The fermented liquid, called “The Wash”, is fed into the base of the pot still and heated. The vapors of the alcohol rise up into the neck, where most of them are pulled off to condense via water cooling. Then the distilled spirit is run through a second still in a complex process – the first stage spirit (“the Foreshot”) is too harsh, and is fed back into the still, while the late-stage spirit is too weak. It’s only the stuff from the middle phase of the process that is suitable, and part of the job of the master distiller is to monitor that closely and know exactly which should be re-distilled and which is ready to be fed into that pipe that leads out into the filling room.

The fourth element is the casks. By law, all whisky must be aged a minimum of three years in oak casks – generally used barrels from Kentucky bourbon, although some use sherry or port casks for additional flavor. It is the slow process of aging that imparts to the whiskey its distinctive golden color, as well as mellow flavors from the barrels.

The final element is location – Laphroaig, Lagavulin and Ardbeg are all right on the sea (for ease of transport back in the early days), and it does seem that some of the salty, iodine character of the sea air is absorbed by the whisky.

Laphroaig also has a special program, called Friends of Laphroaig. If you’re a true fan, they will endow you with lifetime ownership of a square foot of Islay; when you arrive for a visit you’re treated not just as a customer or guest, but as part-owner. And your rent will be paid promptly, with a dram of their finest spirit. (Not to worry, the other establishments will let you sample their wares as well, although not with quite the same flare.)

The distilleries on the north end of the island – Bruichladdich, Bowmore, Caol Ila and Bunnahabhain – use spring water rather than the highly-peated waters of the south, to produce a gentler spirit. But even so, the flavor is distinctive, and to many palates more intense than the whiskies produced on the mainland. And Bruichladdich, which was recently resurrected by a small group of private investors, is doing some experimentation, including offering a highly-peated variety that out-smokes any other brand on the market, and a fully-organic whisky made from some of the finest barley grown anywhere.

All that sea air and traipsing over the moors is bound to bring on an appetite, and the good news is: the Scotts have much more to offer on the culinary side than haggis. The Port Charlotte Hotel is the finest spot on the island for both room and board; nearly all accommodations look out over the ocean, and the dining room offers a delightful assortment of beef and lamb from local farms and locally-caught seafood. Try the venison, the big Loch Gruinart oysters with lemon and lime or the Loch Etive mussels. (and make sure to reserve your table, as it fills early). And after dinner, you can sample more whisky – the bar carries more than 100 varieties – and enjoy some local music by the log fire.

There’s more to Islay than food and drink, of course. The ubiquitous sheep yield a fine wool that the locals weave into beautiful blankets and, of course, kilts; there’s a fine golf course, if that’s your speed. And there are several ruined castles, from the day when the head of Clan MacDonald was known as the Lord of Isles and ruled all of western Scotland from his seat at Finlaggen.

Islay boasts the most intense whiskies, but there are hundreds of other distilleries, many worthy of a visit. Dalwhinnie is both the finest and highest of the Highland group, perched in a mountain pass on the confluence of old cattle trails. The two most popular whiskies in the world, Glenfiddich and Glenlivet, each offer tours and tastings. And Highland Park is a unique, wild, isolated outpost on the far-north Orkney Islands.

One advantage to a Scotland visit: the country is tiny! So you can, if you want, stay in the heart of Edinburgh at the luxurious Balmoral Hotel, do the distilleries as a series of day trips, and be back in time for afternoon tea at the Palm Court or a session at the Balmoral Spa. The Speyside distilleries are easily reached by car (just a couple of hours north), and Islay or the Orkneys are an even shorter “puddle-jumper” flight; you can also arrange for tours through the hotel.

Or you can take your time in the grand old peripatetic style. The Minmore Hotel is conveniently located right on the Glenlivet Estate, and was named “The Most Spirited Restaurant” in Saveur magazine’s top 100 list this year. They’re renowned for such intensely Scottish dishes as red venison topped with duck liver foie gras and red wine sauce with chocolate.

And the countryside is dotted with castles, many of which have been transformed into first-class hostelries. Inverlochy Castle was voted Best Hotel in Europe by Travel + Leisure magazine last year; the Loch Torridon Hotel was once a grand shooting lodge for the first Earl of Lovelace. If you choose to stay at the Kinnaird Estate – set within 7,000 acres acres on the banks of the Tay in Pershire, offering salmon fishing, partridge shoots, and a full restaurant and spa, you may not want to leave and go anywhere else!

That is, in fact, the hardest part of a Scottish vacation – leaving! But at least you can take a couple of bottles of the country’s signature spirit home with you, to sip by your own fire and relive the memories.