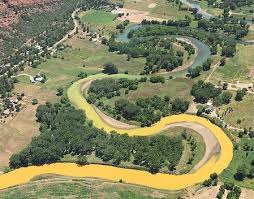 What on Earth was the EPA doing cleaning up after a private mining company in the first place? Don’t expect any of the GOP politicians casting stones over the Colorado mine spill this week to ask such an obvious a question.

By now you’ve heard the basics – there was a gold mine loaded with toxic water, it was leaking thousands of gallons a day (already creating a deadzone downstream), the Environmental Protection Agency went in to try and clean things up and inadvertently sent a flood of ugly brown sludge down the Animas River into Colorado and Utah.

But what was the EPA doing there in the first place?

The reason the EPA has to go in and inspect and regulate and fine and oversee is because deadbeat companies are perfectly happy sucking the profits out of mines and factories and power plants, but when it comes time to clean up the mess they made… they’re perfectly happy to walk away. Wipe their hands, send out one last round of bonuses and dividends, then declare bankruptcy and evaporate into thin air, leaving YOU AND ME holding the bag of the cleanup costs.

Privatize profits, socialize the cleanup. Great if you’re a shareholder or owner. Sucks for the rest of us.

In this particular case, it gets even worse. The Gold King mine desperately needed to be designated as a SUPERFUND site – there’s money available to clean up superfund sites, and cleaning up a mess this big takes money. But the locals who remain in scenic Silverton have fought that designation. Since the 1990s. They thought it would be bad for tourism.

(Remember that movie about the giant shark? How they didn’t want to admit there was a shark because if they did the tourists wouldn’t come – to get eaten by the shark? The town fathers of Silverton were perfectly happy to drink toxins as long as there were lots of tourists drinking toxins with them.)

So the EPA was doing what it could with a skeleton crew, 20 years too late, and after being cut year after year by the freedom-loving Tea Partiers in Congress, and without the resources a Superfund designation would have freed up…

And so one kid on a bulldozer zigs instead of zags, and we’ve got diarrhea-colored water flowing through Durango.

That’s like cutting the fire department budget year after year and then bitching when the truck breaks down.

Rep Tipton? Senator Gardner? This mess is YOUR fault.