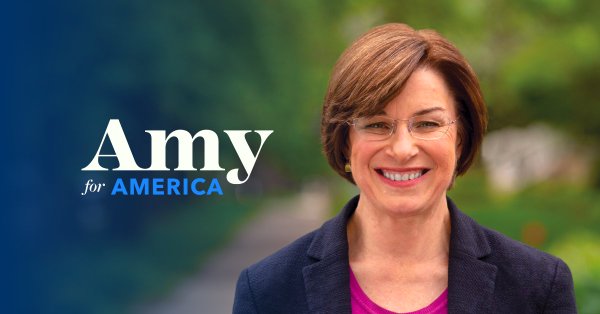 One of the most disappointing things about centrist Democrats is the way they think they have to trash-talk Democratic policies in order to win over non-existent “moderate centrist voters.” Prime example: Despite the growing blue wave last year, Missouri Senator Claire McCaskill ran ads explaining that she wasn’t one of “Those crazy Democrats.” For some reason, this didn’t inspire actual Democrats to come out and vote for her. While Democrats ran the boards in the rest of the country, McCaskill lost. Now, Amy Klobuchar, just days after launching her campaign for president, is downplaying the Green New Deal. Who does she think she’s going to win over?

Why does Amy Klobuchar have to downplay the Green New Deal?

Science is on my side, @realDonaldTrump. Looking forward to debating you about climate change (and many other issues). And I wonder how your hair would fare in a blizzard? ☃️

But she only mentions climate change once after that in her twitter feed, in the first week of her campaign. And as for the Green New Deal, last week, she went on Fox News and called it “aspirational.”

“So I would vote yes [on the Green New Deal resolution], but I would also — if it got down to the nitty-gritty of an actual legislation, as opposed to, ‘Oh, here’s some goals we have’ — uh, that would be different for me.”

GOP Senate Leader Mitch McConnell is forcing an early vote because he thinks it will “trap” the Democratic presidential candidates — sounds like Klobuchar has totally bought into the GOP narrative!

For example, there’s the canard that the Green New Deal wants to support people who “don’t want to work” — based on a “Death Panel”–style misreading of an early draft of a FAQ that was posted by mistake. It was actually saying that coal miners who lose their jobs because of industry disruption might be too old to retrain for other jobs, and for them, retirement with some sort of pension would be the best option. But that’s not what Klobuchar went with. Nope, she took it as a chance to lash out at “socialism.”

“Um, don’t agree with the ‘unwilling to work,’” she said. “I am a Democrat and not a socialist. I actually worked in the private sector for 14 years, and I believe in capitalism.”

That’s great, Senator, but you’re feeding a BS war-on-science narrative, helping Fox News swiftboat the Green New Deal. Democrats have to stop doing that if they want to take control of the messaging and win for a change.

In that same forum, she also trash-talked the idea of “free tuition.”

“No, I am not for free four-year college for all. If I was a magic genie and could give that to everyone and we could afford it, I would … I’ve gotta tell the truth. We have a mountain of debt that the Trump administration keeps making worse and worse, and I don’t want to leave that on the shoulders of these kids too.”

Apparently, Klobuchar is unaware that the US jump-started the space program and a technological revolution by providing education to a generation of scientists and engineers. The tuition at the State University of Minnesota in 1961 was $213. Back then, the idea of low-cost tuition wasn’t “radical,” or “socialist” — it was simply “American”.

One thing we really don’t need is another Democrat saying, “Gee, it would be nice to have all these things, but the gosh-darned debt is just too big.” Not when the Republicans ram through all the tax cuts and fossil-fuel subsidies they like when they’re in power (not to mention military spending), without a care in the world for how their policies affect the debt.

Don’t get me wrong — Klobuchar is no Joe Lieberman, or even a Joe Manchin. Her heart is in the right place. Here’s her full answer to a question about climate change at her CNN town hall:

“I think you all know that this last year was the fourth hottest year in American history. And the Green New Deal is so important right now for our country. We may not have agreements on exactly how it will work and when we can get it done.

“And my point that I made there was that this is a discussion we must have as a country. For too long we’ve just been admiring the problem. We’ve been saying, oh, it’s happening. And most of the members of the Senate did admit that it’s happening, but what are you going to do about it?

“So I will, the first day as president, sign us back into the international climate change agreement. That is on day one. (The audience applauded.)

“I will also, in the first 100 days, bring back the clean power rules that the Obama administration was ready to put in place, and the Trump administration left on the cutting room floor.

“I will also bring back the gas mileage standards and then propose sweeping legislation to upgrade our infrastructure. Anyone that watched that video of that dad driving his child through the lapping wildfires in Northern California will know that this isn’t just something that’s theoretical that’s happening in the future. It’s happening right now.

“And one argument that we need to make for those of us that believe in science, we need to make the argument that this is isn’t economics on one side and the environment on the other side, right? Because if you just let climate change keep going, you already see it in homeowners insurance rates. Gone up 50 percent in ten years, right?

“Well, that is just going to get worse if we don’t start addressing climate change because the market is going to start seeing what’s happening here — it already is, and it’s going to get us in economic trouble. So in addition to all the new green jobs it will create, we have to do this for our economy, but we have to do it right, which is why I answered the question that way and make sure that we have a transition.

She agrees that acting on climate change is “urgent,” but then when CNN moderator Don Lemon asks about specifics, she gets cold feet.

“This is the Green New Deal,” Lemon asks her, “some of which includes a complete shift to renewable and zero-emission energy sources, overhauling the nation’s transportation system to eliminate pollution and greenhouse gas emissions, and to set a goal for carbon neutrality by 2030. Do you believe those goals are achievable?”

And then she uses a word that she repeats over and over in her interviews last week: “Aspirations.”

“I think they are aspirations. I think we can get close. I don’t think we are going to get rid of entire industries in the US.

“Do I think we can cross every ‘t’ and dot every “i” in ten years? Actually, I think that would be very difficult to do. But if we don’t get started and we don’t start with renewable electricity standards, something that I’ve been a proponent of for a long time, we have tried so many things, and they’re just stuck in their tracks. I think this discussion, good or bad, not everyone’s going to agree on how we get there is very important to have, and you do that by launching big, by big ideas.

“And the actual legislation you do, we know there’s going to be compromises. It’s not going to be exactly like that, and we know we’re going to have to look out for different areas of the country and how we proceed and be smart about it for the middle class and for people that are more vulnerable. We want to make this work for everyone. But we have to start the debate.”

Why? Every GOP talking head is out there spouting “Ha! The goals of the Green New Deal are over-ambitious! They’re unobtainable!” Why do Democratic leaders have to go out and say the exact same thing?

Why the need to back down? Why do we have to start compromising before we even get to the negotiating table?

Why can’t we just say, “Hey, this needs to get done, let’s roll up our sleeves and get on it?”

Anyway, the time for debate is long past, as this Tom Toles cartoon vividly illustrates.

Senator, if you’re reading this: Let’s see less pre-compromising and trash-talk of green goals, and more like this: